Why Do Catholics think Jesus is Actually In the Eucharist? (VIDEO)

At the Last Supper, Jesus made it clear that He intended that the Eucharist be His real body and blood.

The following is an edited excerpt from Fr. Spitzer’s The Real Presence of Jesus in the Eucharist. Click here for the full length article.

Joachim Jeremias, author of the book The Eucharistic Words of Jesus, sought to piece together the exactly what occurred at the Last Supper. Using literary constructions and Semitisms as clues to resolve differences, Jeremias concludes that the rite of the Last Supper probably took the following form.

Jesus gathered with His disciples before the feast of the Passover and indicated to them that He longed to celebrate this Passover with them, but instead of doing so, fasted while the other disciples celebrated. After drinking one of the four Passover cups while they were eating the Passover meal (or an adapted Passover ritual), Jesus initiated the ritual of the bread, identifying it with His body: “Jesus took bread, gave thanks and broke it, and gave it to his disciples, saying, ‘Take; this is my body.’” Then, after the completion of the Passover meal, Jesus initiated the ritual of the wine which He identifies with the covenant in His blood. He took a cup of red wine, gave thanks, and gave it to His disciples, saying, “This cup is the covenant in my blood which is poured out for [the] many.”5 Sometime either prior to or after this (perhaps both), Jesus gives a command to repeat the ritual: “Do this in remembrance of me.”

When He says, “This is my Body which will be given up for you,” the Greek word used to translate His Hebrew (zeh baśari) or Aramaic (den bisri) was sōma instead of sarx. Sarx means “flesh” and would certainly refer to Jesus’ corporeal body given on the cross, while sōma is much broader and refers to the whole person (mind, soul, will, as well as corporeal body). 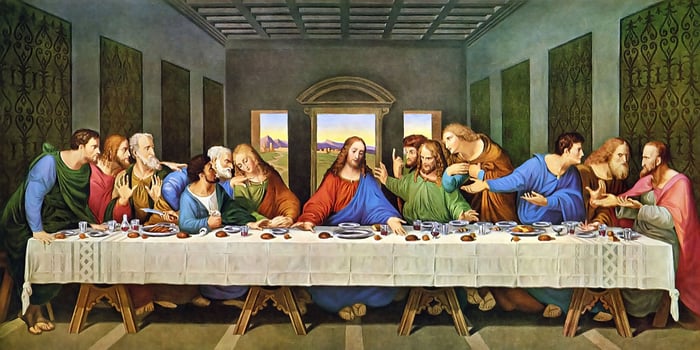 Thus, sōma is much like the word “body” in “everybody” or “somebody” in English. It might, therefore, be roughly translated as “person” or “self.” If we substitute the word “self” for “body” in the Eucharistic words, we obtain “This is my whole self given up for you.” This is remarkably similar to Jesus’ definition of unconditional love in John’s Gospel -- “gift of one’s whole self” (“greater love has no one than this, that he lay down his life for his friends” – John 15:13). In the Eucharist, Jesus is not only giving us His whole self – His whole person – He is also giving us His love, indeed, His unconditional love.

This unconditional love is corroborated by the gift of His blood (which, according to Jewish custom, is separated from the body of the sacrificial offering). When Jesus offered His blood separately from His body, He showed Himself to be making an intentional self-sacrifice.

Blood (the principle of life for the Israelites) was the vehicle through which atonement occurred in sin or guilt offerings. Jesus’ reference to His sacrificial blood would almost inevitably be seen as the blood of a sin-offering – with the notable exception that the sin-offering is no longer an animal, but rather, Jesus Himself, “the Beloved One of the Father.” Jesus humbled Himself (taking the place of an animal – a sacrificial sin-offering) to absolve the sin of the world forever.

Jesus goes beyond this by associating Himself with the paschal lamb. He intentionally coordinates His arrival in Jerusalem with the Passover feast so that His sacrifice will be associated with that of the Paschal lamb. He loved us so much that He desired to become the new Passover sacrifice, replacing an unblemished lamb with His own divine presence. The blood of the Passover lamb (put on the doorposts of every Israelite household) was the instrument through which the Israelite people were protected from death (the angel of death passing over those houses) which enabled them to move out of slavery into freedom (from Egypt into the Promised Land). 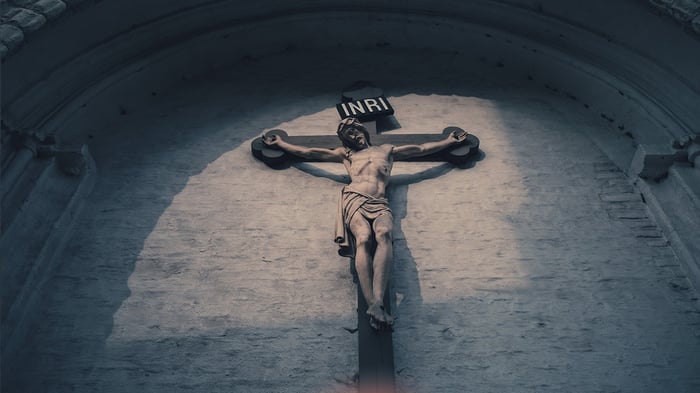 When Jesus took the place of a sacrificial animal, He replaced the worldly freedom offered by the Passover–freedom from slavery in Egypt–with an unconditional and eternal freedom from sin and death. Thus, He made His self-sacrifice the new vehicle for protection from every form of sin and death for all eternity by outshining sin and darkness with His unconditionally loving eternal light.

Jesus intended His sacrifice on the cross to be universal, and to be the power of love and salvation for all humankind; but He did not stop there. He also provided a way for us to receive His unconditionally loving presence (body, mind and soul) throughout the rest of history. He intended to make His loving presence within us a power of peace, reconciliation, healing, and transformation. He did this by making the actions and words of His Last Supper into a ritual, using the simple phrase, “Do this in remembrance of me.” This phrase requires explanation.

“Do This in Remembrance of Me”

We need to understand the first century Jewish view of time and memory to grasp the significance of Jesus’ ritual (now known as the “Eucharistic celebration”). In this view, time is not an unalterable physical property (as in the “space-time continuum” of the Theory of Relativity). Rather, time was seen as a surmountable and controllable dimension of sacred history.

Mircea Eliade, author of The Sacred and the Profane: The Nature of Religion, phrases it this way:

“In imitating the exemplary acts of a god or of a mythical hero, or simply by recounting their adventures, the man of an archaic society detaches himself from profane time and magically re-enters the Great Time, the sacred time”

As Eliade notes, sacred history was seen as superseding profane history (physical history), and through ritual and myth, prophets and priests could return to the sacred time of history as if profane time were not relevant.

First century Judaism was no exception to this. Religious authorities believed that the celebration of the Passover Supper was a return to the sacred events of the Exodus, and that reliving this sacred moment would bring them close to the sacred reality (God/Yahweh), which would, in turn, sacralize them – make them holy.

As Jesus enters into the sacrificial meal with His disciples, He brings this view of time and history with Him. When He says, “Do this in remembrance of me,” He does not mean, “call it to mind.” His view of “remembrance” (translated by the Greek term “anamnesis”) did not separate “mind” from “heart,” or separate a “mental remembrance” from a “ritual reliving.” For Him, the instruction to “do this in remembrance of me,” meant “reengage in this ritual and relive the reality of me in it.” To relive Jesus’ ritual is to return to it – with Him really there.

It is difficult for us, as 21st century scientifically oriented people, to enter into Jesus’ perspective, because it is so dissimilar from the way we conceive time and reality. Nevertheless, if we are going to understand what He was doing, we will have to make the effort – otherwise, His words and actions will be completely masked by our very different worldview.

If we do not impose our view of physical time on Jesus’ view of sacred time—or our conceptually biased view of “remembrance” on Jesus’ view of “remembrance” as “making present” by reliving a sacred event, than His intention of making His body and blood really present to future generations through the Eucharist will not seem to be a misrepresentation of fact or history.

Giulio Fanti, a professor at the University of Padua, has created a 3D image of Christ based on the Shroud of Turin. As ...
Start Reading
Lindsay Rudegeair April 5, 2018 2 min read

Can we believe the scriptural accounts of Jesus' passion, even though there are inconsistencies? Fr. Spitzer tackles this ...
Start Reading
Lindsay Rudegeair March 30, 2018 < 1 min read

Did Jesus' Divinity Save Him from Pain on the Cross?

Today, on Good Friday, between the hours of noon and 3:00pm, we reflect on the crucifixion of Jesus Christ. The wounds of Jesus ...
Start Reading