Before discussing the “just right” physics of the anthropic coincidences, let me emphasize again that citing these anthropic "coincidences" separately does not mean they are independent. One should not imagine, for example, that God picked out a value for the excited energy level of carbon-12 nuclei to enable carbon-12 syntheses, and then, in a separate action, picked out laws for electromagnetic and gravitational forces to enable star formation.

All the events covered by the term "anthropic coincidence" are jigsaw puzzle pieces in one big picture—a Theory of Everything (“TOE”)—crafted by God, the Grand Designer. Accordingly, it is a serious error to attempt to assign separate probabilities to individual coincidences and then multiply them together to get an overall probability for the universe. Finally, the items listed below are by no means the only anthropic coincidences in physics; they are selected as important representative examples. 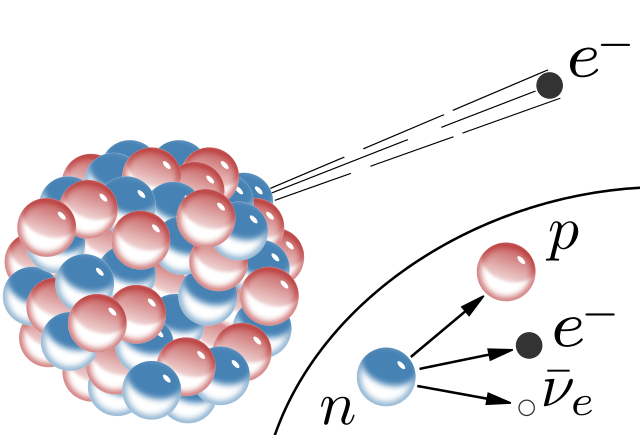 beta decay: a neutron (n) in a radioactive nucleus decays to form a proton (p), an electron (e-), and an antineutrino (v) / Public domain via Wikimedia Commons

The weak force is necessary for determining the number of protons and neutrons present in the universe. If it were too strong the following consequences would occur:

The weak force is also important in enabling the formation of supernovas. When the star explodes in a supernova, the periodic table is formed in the interior of giant stars and then spreads through the universe. If this process had not occurred then life as we know it, with carbon and all the other elements, could not have existed.

The "strong" nuclear force is the force that holds protons and neutrons together to form nuclei of the elements in the universe. Were this force slightly less, only protons would exist; were it slightly greater, no protons would exist—only lifeless heavy elements (Big Crunch).

What might be done to increase the yield of carbon-12? Fred Hoyle predicted that there would be a higher energy state, an energy that had the same value as the lowest energy ("ground") of a beryllium-8 nucleus, or more exactly, of two alpha particles.1

The fact that these energies are the same gives rise to a quantum mechanical "resonance" effect, where the two alpha particle nuclei can easily tunnel over to the excited, the higher energy state of the carbon-12 nucleus. (The term resonance comes from a musical analogy:  if you hit a tuning fork tuned at 440 vibrations/sec it will excite a sound in a hollow pipe or a string tuned to that same frequency.) Fred Hoyle's prediction of the carbon-12 nuclear energy, "the Hoyle state," required to account for the presence of carbon-12 in the universe (and the heavier elements derived from carbon-12) was confirmed experimentally by Caltech physicists.

The Triple-Alpha Process: Two Helium-4 (He4) nuclei collide to form a beryllium * nucleus (Be8). Be* is very short-lived and would ordinarily decay before being hit by another He4 to form a carbon-12 nucleus (C12). However, there is a highway nuclear energy state of C12 that has almost the same energy as that of Be8. This equality of energy enhances the transition of Be8+He4 to C12 (resonance effect) / Public domain via Wikimedia Commons

The 'Just Right' Ratio of Electrical and Gravitational Forces

Electrical and gravitational forces follow an "inverse square law," which is to say that the force varies inversely as the square of the distance (i.e., if you double the distance between two interacting bodies, the force between them would become 1/4 as great). This law—and the finely tuned values of appropriate fundamental constants—enables a balance between electrical and gravitational forces such that atoms could be formed in the early universe and thence stars and galaxies. If the gravitational force/electrical force ratio had been slightly greater, no elements or atoms would have been formed and the universe would have contracted in a "Big Crunch." If this ratio had been slightly less, no stars could have formed because of electrical repulsion between protons.

The next article in this series will deal with “just right” chemistry. But basic chemistry (as we know it) follows from a principle of quantum mechanics, the Pauli Exclusion Principle, proposed by Wolfgang Pauli in 1925. The principle states that no two electrons can occupy the same quantum state. This principle enables a Periodic Table of the elements to form and thus enables chemistry to be active. Without such chemistry, life as we know it would not exist. So the Pauli Exclusion principle is the key to unlocking the door to chemistry, biochemistry, and molecular biology—in other words, the key to unlocking the door to carbon-based life.

Finally, I should note that these “Goldilocks Universe” articles are taken from my ebook, “A Science Primer for the Faithful.”

1 Supercomputer calculations simulating nuclear energies of carbon-12 give the lowest energy state (the "ground" state) and the next highest energy, 7.65 MeV above the ground energy.  This energy is almost the same as that of the Beryllium-8 ground energy.

The 'Just Right' Anthropic Coincidences of Our Goldilocks Universe: Part II: A further look into whether the anthropic coincidences are 'special' by examining astronomical and earth science evidence.

Though there are many contemporary proofs of God (such as that of Bernard Lonergan), this contemporary version of St. Thomas ...
Start Reading
Magis Center August 2, 2010 < 1 min read

This study guide is an accompaniment to From Nothing To Cosmos – 4 DVDs and The Workbook + which is available in the Magis ...
Start Reading
Dr. Robert Kurland, Ph.D. November 22, 2019 6 min read

"Anybody who has been seriously engaged in scientific work of any kind realizes that over the entrance to the gates of the ...
Start Reading