“The Lord possessed me in the beginning of his way, before his works of old.
I was set up from everlasting, from the beginning, or ever the earth was.
When there were no depths, I was brought forth; when there were no fountains abounding with water.
Before the mountains were settled, before the hills was I brought forth:
While as yet he had not made the earth, nor the fields, nor the highest part of the dust of the world.
When he prepared the heavens, I was there: when he set a compass upon the face of the depth:
When he established the clouds above: when he strengthened the fountains of the deep:
When he gave to the sea his decree, that the waters should not pass his commandment: when he appointed the foundations of the earth:
Then I was by him, as one brought up with him: and I was daily his delight, rejoicing always before him;
Rejoicing in the habitable part of his earth; and my delights were with the sons of men.”
–Proverbs 8:22-31

This is the second in a series of articles on the “anthropic coincidences,” the amazing restraints that enable carbon-based life to exist here on earth. (Read the first article here.) Let me emphasize that citing these anthropic "coincidences" separately does not mean they are independent. One should not imagine, for example, that God picked out values for the planet masses and then, in a separate action, decided that the third from the sun would be earth. Nor did He set an angle for the earth’s axis. All the events covered by the term "anthropic coincidence" are jigsaw puzzle pieces in one big picture, a "TOE" (Theory of Everything) crafted by God, the Grand Designer.

Accordingly, it is a serious error to attempt to assign separate probabilities to individual coincidences and then multiply them together to get an overall probability for the universe. One other point should be emphasized: the planetary and geological anthropic coincidences (earth science coincidences) discussed below are not (in some sense) unusual. There are about two trillion galaxies in the observable universe. Each galaxy contains 100 to 300 billion stars.

Thus, if there is variation in the kinds of galaxies and the kinds of stars (and there is), then appropriate conditions to sustain life might be found somewhere—even though it is unlikely that would happen for some particular star. That such conditions exist somewhere is then not in itself remarkable, unlike the case for the cosmology conditions mentioned in Part I and the physics, chemistry, and molecular biology ones in subsequent articles. Nevertheless, to keep the catalog more or less complete I’ll present them here.

A “Just Right” Place in the Galaxy for Our Solar System

Besides heat and light, stars emit "hard" radiation, ultraviolet, x-rays, and gamma rays. This hard radiation can break the chemical bonds in molecules; thus, if there were much such radiation, the chemistry necessary for life could not take place.

Earth is shielded from this hard radiation from the sun by its atmosphere, including the ozone layer. Were there to be lots of other stars near the earth, the atmosphere would not be able to handle the extra radiation and life could not exist.

So, the goldilocks zone for planetary systems is not near the center of a galaxy, where stars are packed closely together, but out near the arms, where there's lots of acreage between stars. The likely locations for life-friendly planetary systems have been simulated by physicists at St. Andrew's University. 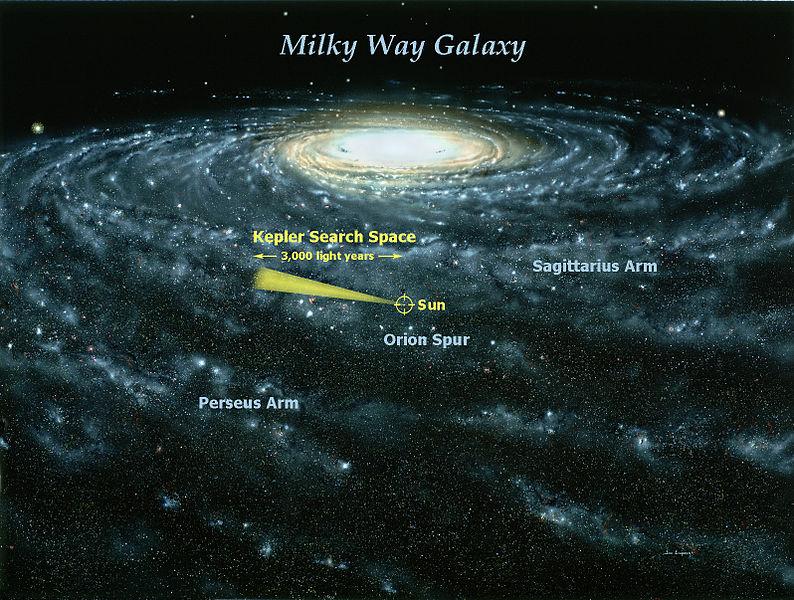 One other point should be noted. In multiple star systems with stars that are close together, the orbit of a planet for such a system would be highly eccentric, like that of a comet. Such an orbit would not be suitable, temperature-wise, for life: part of it would be too cold, part too hot (see below). 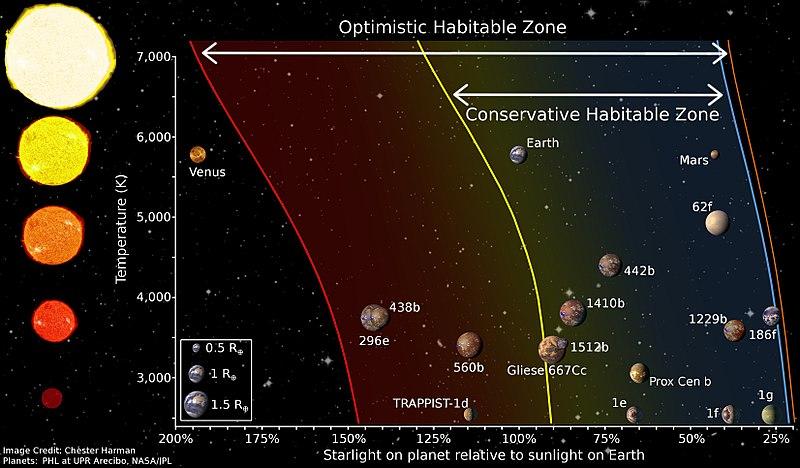 For life-based on carbon chemistry to exist, there are conditions in its habitat. For example, for those chemical reactions to occur at a reasonable rate and for biological molecules to be stable, the temperature of the environment has to lie within a relatively narrow range. (Think of life on earth: it exists in the Antarctic and on the Death Valley desert, but that temperature range is still narrow in the cosmic scheme of things.) The required temperature limits impose, in turn, a condition on the orbit of planets that might contain life: if the planet circles a relatively cold red dwarf, it will have to be much closer to that star than would a planet circling a hot blue giant.

Several planets have been detected (not observed directly) by their gravitational effect on the star they orbit and by their effect on the star's radiation as they pass across it. An extensive list of these is given here. Most of those listed are less than 50 light years away from our solar system. A few, detected by the Kepler space telescope, are several thousand light years distant. A diagram showing how this varies with the type of star and distance from the star has been compiled by Sonny Harman (PSU)—see the illustration above.

And, as noted below, much more is required for a life-friendly environment than a Goldilocks zone orbit for a planet.

Large planets (Jupiter, Saturn, Neptune) have large moons; small planets (Mars, Pluto) have small moons or none (Venus, Mercury). How the earth acquired its large moon is still something of a scientific mystery. But whatever the cause, our moon serves several purposes friendly for chemistry and life.  It is a semi-shield, diverting meteors and larger bodies from the earth; it produces tides that moderate climate change. It alters the earth's orbit and polar inclination in a life-friendly way. Whether these purported effects are essential or just icing-on-the-cake of anthropic coincidences is a matter for debate, a debate in which I don't choose to engage.

An Earth Made for the Water of Life

There is a link between the physical properties of water and the planetary characteristics of the earth—the tilt of its axis, the period of rotation, etc.—that give climactic conditions favorable to life. I've discussed these in a post, "The Theology of Water," which I'll summarize here.  (More “just right” properties of water are discussed in a later article, dealing with chemistry and biochemistry.) These "just right" properties of water stem from one bit of chemistry, the hydrogen bond between hydrogen atoms on one water molecule and oxygen atoms on another, as shown in the illustration below. The hydrogen bond is discussed in greater detail in a later article, but the point to emphasize here is that it's a "just right" connection, not too strong and not too weak, a zipper, not glue or a nail. 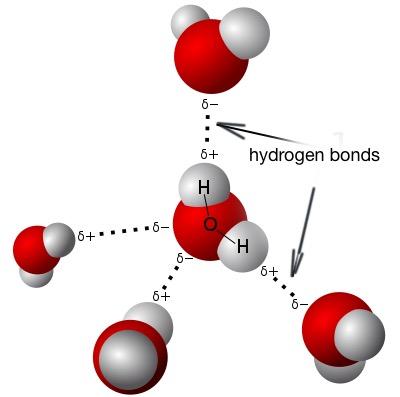 The tilt of the earth's axis is responsible for seasons. When the polar regions are pointed to the sun during the polar summer, they become warmer so clouds tend to dissipate. Were there no tilt of the earth's axis and no polar summer, the polar regions and below would remain cool, and clouds would accumulate. Thus these regions would be further shielded from solar heat and would become colder still. There is a feedback principle involved.

In the preceding discussion, we’ve seen how geologic and chemical requirements for life are interrelated. In Part 3 I’ll examine the “just-right” chemistry in more detail.

Saint Augustine of Hippo: A Theologian for Our Time

“It is also necessary—may God grant it!—that in providing others with books to read I myself should make progress, and that in ...
Start Reading
Dr. Robert Kurland, Ph.D. July 24, 2018 4 min read

"As there is a multiplicity of creatures on earth, so there may be other beings, intelligent, created by God. This does not ...
Start Reading