The 'Just Right' Anthropic Coincidences of Our Goldilocks Universe: Part I

“Scientists are slowly waking up to an inconvenient truth —the universe looks suspiciously like a fix. The issue concerns the very laws of nature themselves. For 40 years, physicists and cosmologists have been quietly collecting examples of all too convenient "coincidences" and special features in the underlying laws of the universe that seem to be necessary in order for life, and hence conscious beings, to exist."
—Paul Davies

"The argument (the Anthropic Principle) can be used to explain why the conditions happen to be just right for the existence of (intelligent) life on the earth at the present time. For if they were not just right, then we should not have found ourselves to be here now, but somewhere else, at some other appropriate time."
—Roger Penrose

"One doesn't show that something doesn't require explanation by pointing out that it is a condition of one's existence. If I ask for an explanation of the fact that the air pressure in the transcontinental jet is close to that at sea level, it is no answer to point out that if it weren't, I'd be dead.”
—Thomas Nagel, Mind and Cosmos

"A common sense interpretation of the facts suggests that a super-intellect has monkeyed with physics, as well as with chemistry and biology, and that there are no blind forces worth speaking about in nature. The numbers one calculates from the facts seem to me so overwhelming as to put this conclusion almost beyond question."
—Fred Hoyle

As the quotations above suggest, the universe in which we live and came to be is not ordinary, but unusual. As the Church Lady in Saturday Night Live of old would say, “Now, isn’t that special!” Or is it? Some scientists would agree with Roger Penrose, that if it weren’t special we wouldn’t be here to remark on it. Many other scientists and philosophers would agree with Thomas Nagel that an explanation giving only the result is not an explanation. (And, of course, if it is special, then there is the implicit conclusion that this is so because of creating Intelligence, which we Catholics recognize as the Trinitarian God.)

In this series of articles (taken from my eBook, A Science Primer for the Faithful) I will set forth some general considerations for assessing whether the anthropic coincidences are “special” and examine specific instances of the “just right” instances of these. I’ll put this evidence, the so-called "Anthropic Coincidences," into categories corresponding to types of science (cosmology [covered in this article], particle physics, chemistry, molecular biology).

So, let’s look at foundational issues before moving on to cosmic evidence.

References to other works are given in the NOTES section below. In this article, I’ll focus on two interpretations: that of George F.R. Ellis (winner of the Templeton Prize) and that of Prof. Robert Koon (Univ. of Texas).

The Interpretation of George F.R. Ellis

In his fine article on philosophic issues in cosmology, Ellis discusses the special nature of physical laws that allow for life to exist. (All quotes are from that article.)

“One of the most profound issues in cosmology is the Anthropic question . . . why does the Universe have the very special nature required in order that life can exist? The point is that a great deal of 'fine tuning' is required in order that life be possible. There are many relationships embedded in physical laws that are not explained by physics, but are required for life to be possible; in particular various fundamental constants are highly constrained in their values if life as we know it is to exist . . . What requires explanation is why the laws of physics are such as to allow this complex functionality (life) to work. . . . We can conceive of universes where the laws of physics (and so of chemistry) were different than in ours. Almost any change in these laws will prevent life as we know it from functioning.” —George F.R. Ellis

He posits as a first requirement for the laws of physics “the kinds of regularities that can underlie the existence of life.” Laws that are not based on symmetry and variational principles are unlikely to produce the kind of complexity that would be required for life. He also sets general conditions that allow for organic life and cosmological boundary/initial conditions.

The Interpretation of Robert Koons

Robert Koons, a philosophy professor at the University of Texas, summarizes some general objections to invoking the Anthropic Principle for carbon-based life:

Here's why atheistic cosmologists invoke a multiverse: if infinitely many universes with potentially different physical laws and constants exist, then it is not unlikely that in all these, one universe with appropriate conditions for life would be present. The analogy is like that of having a lottery ticket with the numbers 1-1-1-1-1 being the winner. That combination of numbers looks improbable, but since there are a whole host of numbers from 00000 to 99999, it is no less probable than any other number. Accordingly, the notion of special Creation, consistent with the anthropic coincidences, is not necessary and one piece of evidence for a Creating God is done away with.

This argument leads us to the evidence from cosmology for the anthropic principle.

Above, I set down some general considerations, taken from articles by Ellis and Koons. I’ll now examine the anthropic coincidences found in cosmology. Now we should note that cosmology is one of the so-called “historical” sciences (as are geology and biology). One doesn’t perform experiments on several universes. And sometimes the reasoning is qualitative rather than quantitative. That being said, let’s see what are the unusual characteristics of our universe that support carbon-based life.

Let me emphasize again that citing these anthropic "coincidences" separately does not mean they are independent. One should not imagine, for example, that God picked out a value for the excited energy level of carbon-12 nuclei to enable carbon-12 syntheses, and then, in a separate action, picked out laws for electromagnetic and gravitational forces to enable star formation. All the events covered by the term "anthropic coincidence" are jigsaw puzzle pieces in one big picture, a "TOE," Theory of Everything, crafted by God, the Grand Designer. Accordingly, it is a serious error to attempt to assign separate probabilities to individual coincidences and then multiply them together to get an overall probability for the universe (but see article 4, "Is there a Probability for the Universe?"). Finally, the items listed below are by no means the only anthropic coincidences; they are selected as important representative examples.

Here are general features of our universe that enable carbon-based life to exist, taken from Chapter 15 of "Modern Physics and Ancient Faith," by Prof. Stephen Barr and from "Faith, Science and Understanding" by Rev. Dr. John Polkinghorne, FRS:

Spacetime Dimensionality must be 4 (3 space, 1 time). See the illustration below. The "unpredictable" regions have to do with force laws—gravity, electromagnetism—having a different form and thereby unstable planetary orbits. The "too simple" have to do with problems of connectivity: for example, two lines will always intersect in space dimensions less than three—you can't have one line (e.g. a nerve or blood vessel) go over another line. 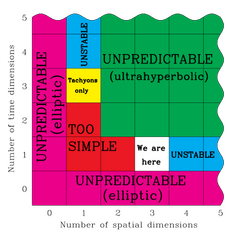 Expansion of the Early Universe

The theory of General Relativity predicts that matter/energy yields a curvature in space-time. This curvature can be positive (as in a sphere), zero (as in a flat plane, a tabletop), or negative (as in a saddle). The amount of curvature depends on the density of matter and energy (see here and Science Background, Section 3 for a detailed explanation), This density is given as a relative quantity, Ω, the ratio of the actual density to a "critical density"—the density for which spacetime is flat. Accordingly, for flat spacetime, Ω = 1 exactly. Measurements of fluctuations in the cosmic microwave background radiation (CMBR) give clues about which curvature exists, as shown by the illustration below. 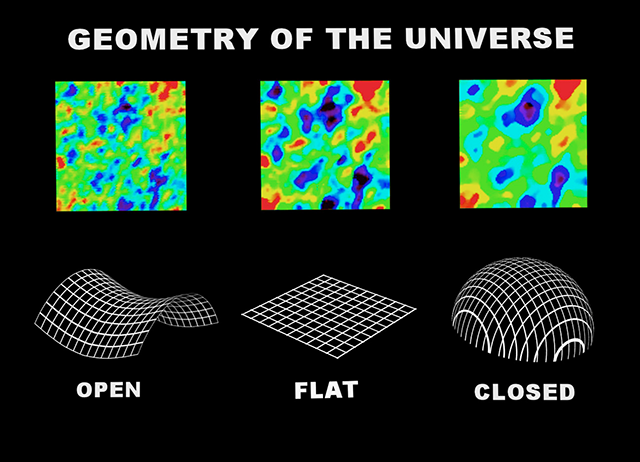 The inferred value of Ω from WMAP CMBR measurements is 1.02 +/- 0.02, corresponding to a flat spacetime, as near as can be measured.

As stated above, the expansion of the universe depends on the density of matter and energy; matter consists of matter that can be detected experimentally and so-called "dark matter.” A major contribution to the total density (almost 70%) is dark energy, the energy that does not radiate. This dark energy is characterized by the parameter Λ (Greek upper case "lambda"), "The Cosmological Constant."

Einstein introduced Λ as a fudge factor in his paper on general relativity: he needed this parameter to yield a static, time-independent, stable universe as a solution to the general relativity equations, rather than one that would expand or contract. Later he said that this was his biggest scientific mistake. But even this mistake has turned golden. As stated above, Λ is now referred to as the "Cosmological Constant," which quantifies the mysterious "dark energy" that is responsible for most of the expansion of the universe, a fudge factor if you will, but one of enormous significance.

"The previous history of the Big Bang is viewed as being at first radiation dominated, then matter dominated, and now having passed into the era where dark energy is the dominant influence." —Carl Nave

The Age of the Universe

Carbon-based life, as we know it would not have existed in a universe only a few billion years old. Why? First, no carbon; it took time for the heavier elements, carbon and beyond, to be formed in the interiors of giant stars and then scattered through the universe by the explosion of stars turned into nova and supernova. Second, there would not have been time for life to have evolved into its present state in only a billion years or so.

Final Thoughts and What’s to Come

So we should not think that we are insignificant because we and our earth are so small compared to the universe. That is part of the overall design. Size is not important for God. The smallest and the biggest are equal in His eyes since his infinity is greater than all infinities (St. Augustine).

Looking forward, I’ll put this evidence, the so-called "Anthropic Coincidences," into categories corresponding to types of science (particle physics, chemistry, molecular biology). One should realize that these disciplines are not independent, but linked together by fundamental theory. The final article will ask the question “Is there a probability for the universe?” And the answer is . . .

In the next article, I’ll examine the anthropic coincidences for the different kinds of forces in physics.

How Science Works, Part I: How We Believe—Faith and Revelation: This is the first of a series on how science works and the limits of science: things we believe by faith.

Extraterrestrial Life Part I: Chemical Evolution: What kind of chemistry does life, as we know it, require in order to exist?

The Theology of Water

"The water that I shall give him will become in him a fountain of living water, welling up into eternal life. This is a new ...
Start Reading
Magis Center August 2, 2010 < 1 min read

This study guide is an accompaniment to From Nothing To Cosmos – 4 DVDs and The Workbook + which is available in the Magis ...
Start Reading
Dr. Robert Kurland, Ph.D. September 29, 2022 8 min read

“The Lord possessed me in the beginning of his way, before his works of old. I was set up from everlasting, from the beginning, ...
Start Reading