In the early sixteenth century, raised in the Aztec religion, there was a boy named Cuauhtlatoatzin (meaning “singing eagle”). He would later learn about God from a group of Franciscan missionaries and would then convert to the Catholic Church in 1524. 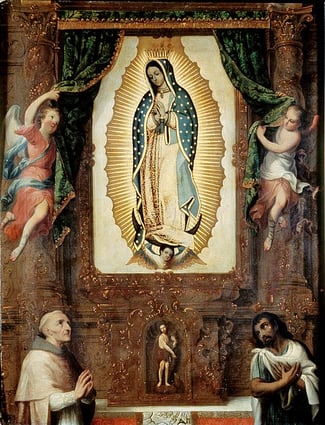 Altarpiece of the Virgin of Guadalupe with Saint John the Baptist, Fray Juan de Zumárraga and Juan Diego by Miguel Cabrera / Public domain, via Wikimedia Commons

Later, to be known as Juan Diego, he would take a familiar path to continue to grow in the religion he had converted into. During these walks, in 1531, Juan Diego would receive a life-changing miracle—a miracle that is forever linked to the biggest source of conversion in North America.

On December 9, 1531, the Blessed Virgin Mary appeared to a native Aztec, Juan Diego. She asked him to go to his bishop, Bishop Juan de Zumarraga, and ask him to build a church on Tepeyac Hill. After telling Bishop Zumarraga, Zumarraga did not believe him, but the Blessed Virgin appeared to Diego that very same day and, yet again, asked him to return to his Bishop with the request.

Upon asking the Bishop again, Bishop Zumarraga still hesitated and asked Diego to return with a sign. Sadly, before Diego could return to the hill, Diego’s uncle fell very ill. On December 12th, the Blessed Virgin appeared to him in the street, promising that if he returned to the hill, he would receive a sign and that his uncle would be completely healed. Following her instructions, Diego did return to the hill where he found Castilian roses growing (not native to Mexico). Diego gathered the roses, put them in his tilma, and returned to Bishop Zumarraga. When he opened his cloak, and the roses fell to the ground, the picture of the Lady of Guadalupe appeared on the tilma. The evidence of the roses and image was enough to convince the bishop to build the first church atop Tepeyac Hill.

Photograph of an Image of the Tilma of Our Lady of Guadalupe / Public domain, via Wikimedia Commons

The image of Our Lady of Guadalupe itself has many extraordinary attributes that border on the miraculous and could very probably be verified as miracles. Five attributes were scientifically tested in the 20th and 21st centuries:

Juan Diego is Made a Saint

After his encounter with the Blessed Virgin, Juan Deigo lived a life of devotion to the Church and spreading her message. He died in 1548 and was buried in the first chapel dedicated to the Virgin of Guadalupe.

In 2002, Pope John Paul II was also the one to proclaim him a saint. Juan Diego is now known as the patron saint of indigenous people.

St. Juan Diego inspires us to be bold in our faith and not shy away from sharing it.

The Blessed Virgin appeared to Juan Diego during his normal routine and she entrusted him with a mission that required him to be strong in his faith and persistent in its path. His action inspires us to remain steadfast in our faith—and know that even when we shy away from it, God will continue to invite us to grow closer to Him (like the Blessed Virgin appearing to Juan Diego when he took another path to avoid her).

We must remember that in spreading the love of God—and the teachings of the Church—our voice may be bigger and more impactful than we may ever fully comprehend.

May Juan Diego light a path for you to be as faithful and bold as you can be.

Can Catholics Believe in Near Death Experiences?

An in-depth look into near-death experiences and where they fit into the Catholic Faith.
Start Reading
Lauren Woodrell

The History of the Christian Christmas Tree

The Christmas tree is one of the biggest symbols of Christmas—but what are its origins, and where can you find meaning in yours?
Start Reading
Fr. Robert Spitzer, S.J., Ph.D.

Can science prove that the Juan Diego tilma was not done by the miraculous hand of God? Take a close look at five aspects of the argument.
Start Reading