The Shroud of Turin Inspires a Hyper-Realistic Body of Christ

On October 13, 2022, at the Salamanca Cathedral, the first-of-its-kind hyperrealistic, volumetric artwork of the body of Christ was revealed. The new exhibition, entitled “The Mystery Man,” concludes a fifteen-year-long effort by Álvaro Blanco and a group of artists under Blanco’s instruction.

The exhibition first takes viewers through a moving narration of the Passion and death of Christ and concludes with the extraordinary actualization of the body of Jesus Nazareth could have looked like—according to the Shroud of Turin.

The Inspiration Behind ‘The Mystery Man’: The Shroud of Turin

The Shroud of Turin is a burial shroud of linen cloth, woven in a 3:1 herringbone pattern. Measuring 14 feet 3 inches in length and 3 feet 7 inches in width, it is a single piece of cloth bearing a front and back image of a crucified man. While The Church does not recognize nor deny the origins of the Shroud, it remains an important artifact within the Catholic faith and is one of the most studied artifacts in the world.

Discovered in the 1350s in medieval France, the Shroud caused the ex-communication of Margaret de Charny, survived a fire in Sainte-Chapelle in Chambéry, and was hidden from the Nazis during World War II.

In 1988, a carbon 14 test was performed on the Shroud. The results concluded that the cloth was from the mid-thirteenth century. However, the samples used were only taken from a small area of the cloth—the section that was repaired after the fire in Sainte-Chapelle.

Later tests have placed the origins of the shroud to A.D. 50 (give or take 200 years) with a 96% certainty. Furthermore, the pollen on the cloth is unique to Judea, the woven pattern is the product of first-century techniques, and the AB blood stains predate the image on the cloth. 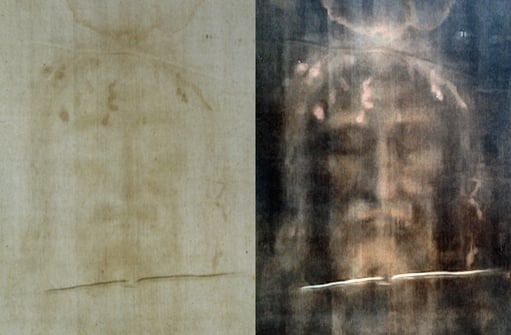 In 2018, Giulio Fanti, a teacher of mechanical and thermal measurements at the University of Padua, created a 3D carbon copy of the Jesus of Nazareth through the use of the Shroud. Now there is a hyper-realistic body of Christ: “The Mystery Man.”

The Hyper-Realistic Body of Christ Described

The sculpture weighs approximately 165 pounds and is made up of latex and silicone. It is postured in a way to show Christ's body in rigor mortis with the legs slightly bent, the back raised, and the hands crossed.

Over the entire sculpture—on the head, chest, arms, legs, and even feet—you can see actual human hair. One can also see the pores of the skin and freckles and even lifelike eyelashes and eyebrows. There is also a tiny braid in the hair that keeps the hair behind the head. As a result, the artwork thrives on the feeling of realism that lacks no detail.

With the back being slightly raised, you can see the wounds inflicted by the crown of thorns. Just below the head, bruises cover the back to depict the weight of the cross He bore.

On the face, the right eye is bruised and the nose is broken to show the torture endured. The hands and the feet show the gruesome trauma of the nails that pierced them and, between the fifth and sixth rib on the right side, the wound inflicted by the spear.

The Mystery Man: Standing Before Jesus of Nazareth

While the sculpture itself is a work of art, it is free of artistic interpretation.

The exhibit itself does not deepen the mystery, but rather allows us to step toward it and see the scientific and historical evidence without interpretation.

With wounds and torture marks that resemble those that Jesus of Nazareth suffered (as stated by the Bible) and marks scientifically placed from the evidence on the Shroud of Turin, the likeness to Jesus Christ is insurmountable.

The sculpture—being so lifelike and realistic— brings its viewers closer to the scientific and historical evidence of the Shroud of Turin and the Man of the Shroud.

Curator Álvaro Blanco said during a presentation on the exhibit said that when he saw the finished body he was convinced that “he was before Jesus, he was before the image of the body of Jesus of Nazareth.”

The exhibit will remain at the Salamanca Cathedral until December. It will then begin its pilgrimage around the world. The only dates known are that the exhibit should be present in Lisbon, Portugal, for World Youth Day in 2023, and in Rome in 2025 as part of the Jubilee of Mercy.

Giulio Fanti, a professor at the University of Padua, has created a 3D image of Christ based on the Shroud of Turin. As ...
Start Reading
Lindsay Rudegeair February 23, 2018 2 min read

A new article in Biblical Archaeology Review reveals that scientists may have discovered a clay seal bearing the name of the ...
Start Reading
Lindsay Rudegeair January 26, 2018 2 min read

Scientists in China have successfully cloned monkeys using the same method that produced Dolly the sheep in the late '90s. ...
Start Reading