Do modern theories in cosmology contradict the idea of creation?

“By faith we understand that the universe was created by the word of God, so that what is seen was not made out of things that are visible” Hebrews 11:3 (KJV)

If a picture is worth a thousand words, this image is worth about 13.8 billion years. 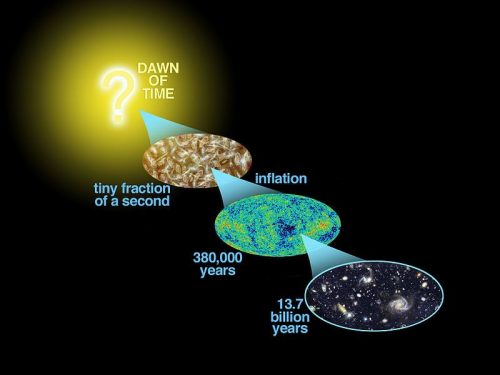 Chronology of the Universe.(Note: the time scale is expanded toward the beginning.) From Wikimedia Commons

The early image represent the very high energy mix of quarks and photons before fundamental particles—electrons and protons—were formed; the 380,000 year image is of the COBE microwave background radiation, the burnt embers of the Big Bang energy; the present day image represents the universe as it is now, galaxies and all.

Since what went on before the 380,000 year time horizon can be only be inferred, not measured, cosmologists rely on the Standard Model to understand how the fundamental particles were formed from the initial high energy mix. A detailed account is given in this article, which also discusses the formation of stars, galaxies and the solar system.

A Day Without a Yesterday: A Beginning?

St. Thomas Aquinas agreed with Aristotle that creation required a First Cause, which Aristotle called the Prime Mover and which Aquinas called God. However, he believed that only Revelation, not reason, could assert that Creation began at an instant in time.  We now know more about this from science.

“Big Bang” is now a well-known term—how did it come about? Einstein saw that a solution to his General Relativity field equations could give a singularity at t=0, that is, a universe of zero size and infinite energy, with the universe expanding as time increased. (In other words, that there was a beginning to the universe.) In order to get a static, non-time dependent universe (which was the accepted viewn 1917 when the theory was first published), he introduced a “fudge factor”, the “cosmological constant”, to cancel out the effects of gravity. Einstein later called this “the biggest mistake of my life”

Edwin Hubble in the 1920s showed by his observation of galactic red shifts that the velocity of galaxies moving away from us was proportional to their distance from us.

Model of Expanding Universe as a Rising Raisin Bread Loaf: every raising gets further apart as the bread expands. From Wikimedia Commons.

This leads to the idea of an expanding universe, an expansion of space-time. (A good analogy of this is given in the illustration: imagine you’re sitting on a raisin in a very large loaf of raisin-bread, which is expanding as it’s being baked; you see each raisin moving away from you, and the further a raisin is from you, the faster it seems to be moving away. And it wouldn’t matter which raisin you would be sitting on—the picture would be the same.)

In 1927 the Belgian priest, Fr. Georges LeMaitre proposed such an expanding universe as an explanation of the observed galactic red shifts; he justified this explanation by his solution of the Einstein field equations to yield a universe size increasing with the time. By 1931 LeMaitre’s theory had gained acceptance; he modified it to propose a single point at the origin, “The Primordial Atom”. The term “Big Bang” was given to this theory by Fred Hoyle in 1950, who advocated a steady-state universe, in which matter was continually created as the universe expanded. Although Hoyle may have used “Big Bang” as a joke, his steady-state theory was contradicted by astronomical findings that confirmed the Big Bang notion.

Embers of the Big Bang

And now a few words about crucial evidence for a “Big Bang” event, the cosmic microwave background radiation (CMBR). In 1965 two Bell Laboratory physicists, Arno Penzias and Robert Wilson, trying to explain a noise source in their microwave antenna, found that it was coming from all directions in the sky. Consulting with Robert Dicke’s group at nearby Princeton, they learned that it was the burnt out, cooled remains of the Big Bang. Here’s a simple-minded explanation (see here Science Background, the Quantum Catholic, for a more complete description, or): a heated object will radiate energy to cool off; the hotter the object, the bluer the radiation (shorter wave-length); as the object cools, the radiated energy becomes more red (longer wavelength). The very long COBE wavelength is in the microwave region of the spectrum and corresponds to a temperature of about 3.5 K (close to absolute zero), the cooled down embers of the Big Bang.

Some physicists propose models to avoid the theistic implications of the Big Bang model. These theories are not and cannot be supported by empirical evidence. Such models more properly belong in the domain of metaphysics than science. I’ve discussed these models at some length in a blog post, “Mathematical Metaphysics–Quantum Mechanical Models for the Early Universe.”

Although there are problems with an unmodified Big Bang theory --the details of which are beyond this post--rather than contradicting the idea of a beginning, theories about the evolution of the universe support it.

The Theology of Water

"The water that I shall give him will become in him a fountain of living water, welling up into eternal life. This is a new ...
Start Reading
Dr. Robert Kurland, Ph.D. November 10, 2018 4 min read

Does Quantum Mechanics Speak to Catholic Teaching I: General Considerations

This post is part one of an article series. Parts two and three can be found at Does Quantum Mechanics Speak to Catholic ...
Start Reading
Dr. Robert Kurland, Ph.D. December 14, 2018 6 min read

This post is part two of an article series. Parts one and three can be found at Does Quantum Mechanics Speak to Catholic ...
Start Reading