More than any culture in the history of the world, ours is obsessed with portraits. The individual face, its soulful eyes staring back at you, in paint or stone, is an anchor of our visual landscape. Family members gaze out from our living room walls; celebrities stare intensely from billboards; strangers beckon with their eyes, seeking fame and validation across social media platforms. Even school yearbooks and workplace directories are full of portraits: these simple images are essential tools for navigating the community.

But the portrait isn’t merely a label or tool. It also has a powerful mystique—as if it can reveal true personhood. Some ancient fairy tales recount princes falling in love with portraits. And though one could argue such stories are shallow—evidence of appearance-worshipping superficiality—in our hearts we know otherwise. In fairy tales, the prince’s love is always pure, and the portrait always shows more than just what is outward. In 1625, the great Peter Paul Rubens hinted as much in his picture of King Henry IV’s betrothal to an Italian princess. Here, the smitten king experiences fairy-tale love at first sight, but it’s clearly not only about beauty. Above and behind the lady’s portrait, symbolic figures representing wisdom, faithfulness, and love swell to fill the air, invisible-but-present testimony to the princess’s character. The picture, we understand, is more than a picture. It is a window onto a soul. 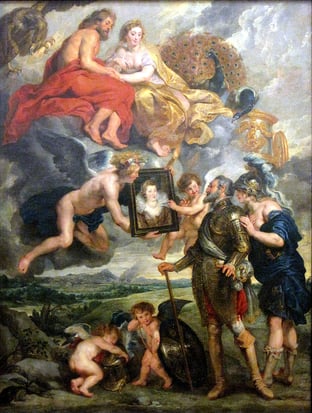 Modern humans, it seems, hold deep, subconscious assumptions about the dignity of persons, the preciousness of individual differences, and the ability of the body to reflect the spiritual. These beliefs are summed up in the art form of the portrait – an art form that, interestingly, did not reach its full power and potential until the rise of Christianity in the first century A.D. The portrait and the Christian religion, in fact, arose hand-in-hand, together bearing witness to a new understanding of human dignity ushered in by Christ’s incarnation. Even though the Christian religion itself is perhaps no longer fashionable among Western elites, the Christian understanding of human dignity still captivates the imagination. This helps explain why the portrait is now a universal art form, embraced by people of all traditions and all walks of life.

The Rise of the Portrait

History shows that in the early centuries A.D., just as the Christian religion widely declared God’s advent in human form, the portrait came into its own. Christ Himself, in a sense, had been a “portrait” of the ineffable God. And He had taught that the human form— in all its iterations—could be a true “image of God.” Accordingly, in increasing numbers, “regular people” claimed their dignity as God’s image-bearers. Their portraits began multiplying—particularly in burial contexts. Often these images, like those in Rome’s catacombs, pointed toward resurrection—a time when believers would become their true, eternal, Christ-echoing selves.

Intriguingly, in the years just after Christ, it wasn’t only in Christian contexts that portraiture enjoyed a boom. There seems to have been something “in the air” making people everywhere reverence the human image—even in cases where it had been absent before. In first-century India, for example, portraits of the Buddha began to emerge, and they quickly replaced mound-like reliquaries as believers’ focus of devotion. 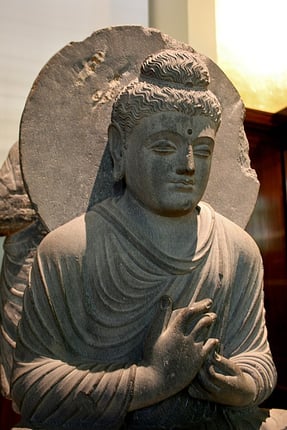 Also in the first century A.D., the common people of Egypt’s Faiyum Basin began to paint meticulous, vibrant portraits of their dead, capturing a sense of character that transcended death. 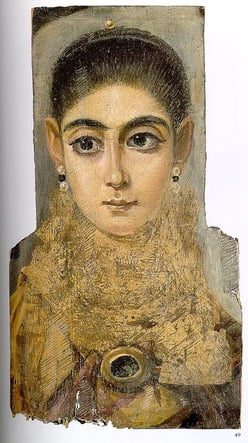 Portrait of a woman, known as "L'Européenne" in the Louvre Museum / Public domain, via Wikimedia Commons

Perhaps the greatest flowering of the portrait genre, however, occurred in the context of the saintly icon. These sacred images—rectangular portraits of the holy dead—proliferated across the Christian world. They captured the implications of Christ’s incarnation in a nutshell: the human image as God-bearing; the preciousness of the individual; the hope of resurrection and the promise of our heavenly fulfillment. Saints were simply individuals whose fulfillment had already been achieved! In a famous 6th-century icon of St. Peter, the leader of Jesus’s disciples is shown as a both unique, wholly human person and also as a citizen of eternity. He is serene and powerful, with a humble, yet visionary, gaze. Behind his head, a golden halo lifts him outside of time and into a realm of holiness. On the sides of the image, beautiful but mysterious architecture suggests Peter is dwelling in the city of God. 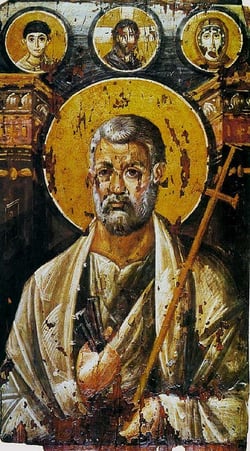 The Portrait as an Eternal Promise

This 6th-century icon of St. Peter feels deeply familiar to 21st-century audiences because it shares the mold of our own, ubiquitous portraits. Indeed this unique-yet-timeless form, capturing the personal eternal in a softly-lit rectangle, has taken over our global visual culture, reaching from Christian icons, to da Vinci’s Mona Lisa, to Andy Warhol’s Marilyns, to giant Chinese images of Mao Tse Tung. It is this same, timeless mode that stares out from a billion computer screens, in the form of “selfies,” wedding shots, and backlit vacation photos. The portrait is an irreplaceable component of political campaigns, publicity tours, royal rituals, and religious movements all over the globe. We depend on it to express our deepest beliefs about human distinctiveness and dignity that underpins efforts toward community-building, social justice, and equal rights.

Though we may not agree, today, regarding the theological basis of the human dignity we all profess to defend (sometimes in contradictory ways), our portraits speak for us. Deep down, we intuit our true worth and call. Art forms like the portrait, which come from pre-conscious intuition rather than rational deliberation, poignantly bring such hidden truths to light.

Art for the Ages: The Eyes of a Woman Artist: Dr. Katie Kresser looks at the works of Artemisia Gentileschi—one of the first woman artists in history to enjoy a high-profile professional career.

Since the turn of the millennium, the 17th-century Roman artist Artemisia Gentileschi has become something of a cause celebre. ...
Start Reading