The first images from the James Webb Space Telescope (JWST) released in early July gave the world startling images of an apparently organized early universe, interacting galaxies, and star-forming regions in the Carina Nebula. JWST continues to transmit data, which is collected by its four instruments, and analyzed by teams of researchers who eagerly await its arrival. Many research teams have access to the archived data as it arrives, but others have direct access to the instruments and can point them toward specific regions or objects. Access is granted based on peer-reviewed proposals through the General Observers (GO) program run by the Space Telescope Science Institute (STScI).

As part of Cycle 1 of that program, the JWST turned its instruments towards objects closer to home. Rings around Neptune appeared in unprecedented clarity, spectrographic data of Mars may yield new information about the atmosphere and surface of the Red Planet, while infrared data from NIRcam reveal haze and polar auroras in Jupiter's atmosphere.

Rings Around the Ice Giant Neptune 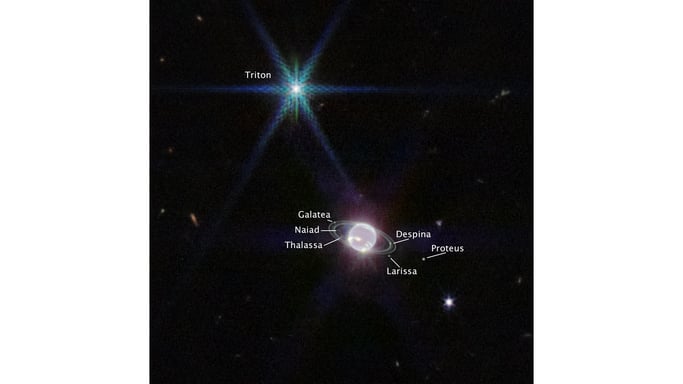 The JWST image of Neptune is hauntingly beautiful. Rather than appearing blue as in the Hubble images, Neptune looks like a glass ornament suspended in space. The rings have not been observed since 1989 when Voyager 2 visited the icy giant. Fainter dusty rings are visible along with more clearly defined rings. Images of seven of Neptune’s fourteen moons may reveal secrets of their formation, and the most prominent moon Triton appears like a bright star in the image.

Since Mars is so close to Earth both the visible and infrared light coming from its surface cause “detector saturation” in JWST’s NIRcam, but the spectrographic data is still very useful. According to NASA:

Webb can capture images and spectra with the spectral resolution needed to study short-term phenomena like dust storms, weather patterns, seasonal changes, and, in a single observation, processes that occur at different times (daytime, sunset, and nighttime) of a Martian day. 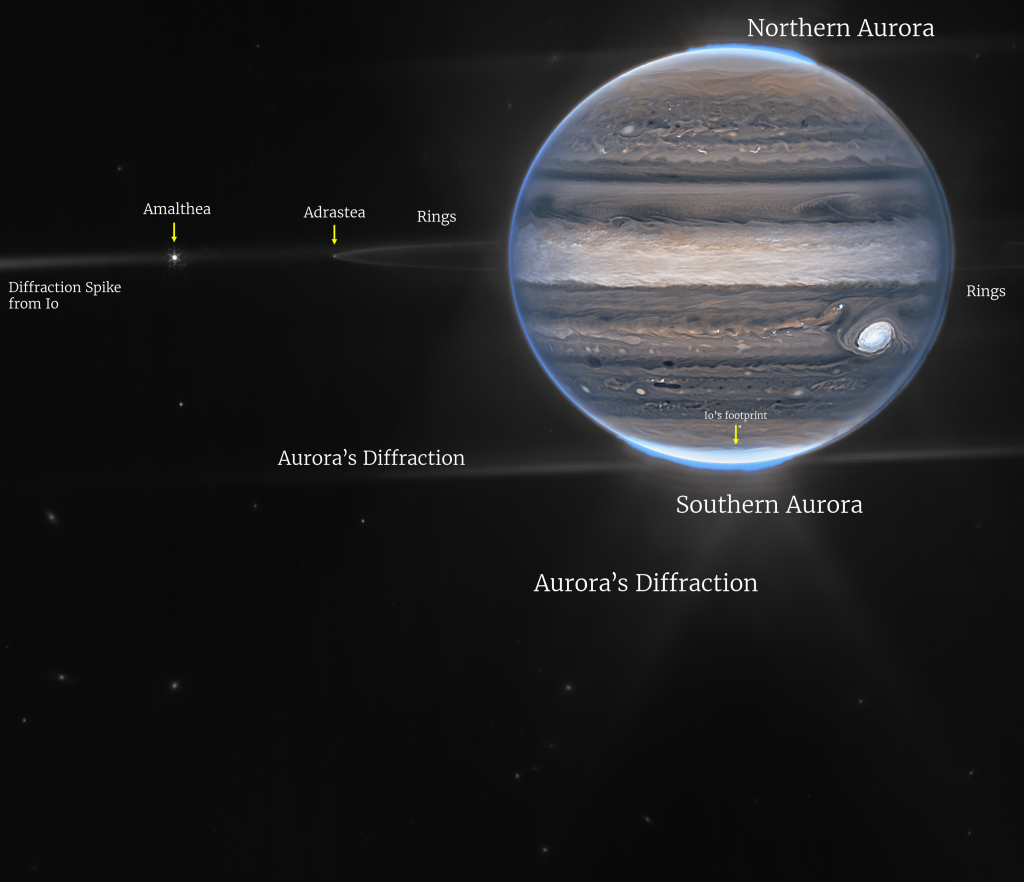 Jupiter’s famous Red Spot, actually a large storm system, appears white in the images because of the amount of sunlight that it reflects. Scientists have been surprised by the quality of the JWST images of Jupiter. One of the lead researchers in Webb’s Early Release Science program, Thierry Fouchet, a professor at the Paris Observatory, observed, “It’s really remarkable that we can see details on Jupiter together with its rings, tiny satellites, and even galaxies in one image.”

Using different filters, auroras have been noted at Jupiter’s poles along with high clouds and haze. Also visible are Jupiter’s rings and two of its tiny moons. Although the images are striking, researchers are eager to further process all the data exploring the chemistry and dynamics for their Jupiter Systems program.

Forthcoming proposals about our neighborhood are on the horizon. These include looking at the moons of Uranus, examining the trace gasses of Jupiter’s moon Titan, and exploring Pluto’s climate system. There are several proposals examining the composition and formation of asteroids, as well as a search for Trans-Neptunian Objects smaller than 10 Kilometers!

The Images Are Only the Beginning

While the images are beautiful, inspiring awe in their viewers, the research teams are only beginning to mine the data trying to answer the questions their proposals raise. In the process, not only will we continue to see the grandeur of the cosmos like never before, but our understanding of the intricate details of its composition and formation will take many leaps forward. As Fr. Spitzer observed in an earlier post about Webb’s images:

"We find exactly what we in faith might expect: orderliness and elegance with unbelievable mathematical precision, opening upon an immense beauty unraveling into a most accommodating environment through which the Lord would impart a transphysical soul to creatures made in his very image and likeness. The heavens truly do declare the glory of God." —Fr. Spitzer

Webb Images Reveal the Intersection of Science and Scripture: New images from the James Webb Space Telescope allow us to see both science and scripture in the heavens above.

Giulio Fanti, a professor at the University of Padua, has created a 3D image of Christ based on the Shroud of Turin. As ...
Start Reading
Lindsay Rudegeair January 26, 2018 2 min read

The Shroud of Turin Inspires a Hyper-Realistic Body of Christ

On October 13, 2022, at the Salamanca Cathedral, the first-of-its-kind hyperrealistic, volumetric artwork of the body of Christ ...
Start Reading