From February 11 to July 16, 1858, Saint Bernadette Soubirous met the Blessed Virgin Mary eighteen times at the Grotto at Lourdes, France. Despite the Church’s and town’s growing hesitation surrounding the Grotto’s apparitions and cures, an ecclesiastical committee declared the apparition as authentic in 1860.

The Grotto of Lourdes has since become a shrine that receives approximately four million pilgrimages with hundreds of exceptional healings each year. As a result, the Lourdes Medical Bureau was instituted in 1905 to render a judgment that a particular cure was near-instantaneous, efficacious throughout the remainder of life, and, in all other ways, scientifically inexplicable.

Of all seventy beautiful miracles from the Grotto, below are three miracles worth learning about as we approach 164 years since the first apparition.

The First Recognized Miracle of Lourdes

Catherine Latapie lived in Loubajac—a town only a few kilometers from Lourdes. In October of 1856, Latapie had fallen from a tree causing severe damage to her right hand. She suffered from ulnar nerve paralysis that is a consequence of a fracture of the forearm leaving two fingers in her right hand completely paralyzed.

In late February 1858, Catherine stirred in the night with a feeling that she was being called to go to the Grotto—during the continued apparitions—to heal her hand. On March 1, 1858—while pregnant with her fourth child and accompanied by her children—she traveled to Lourdes.

At dawn, she met Bernadette just before the twelfth apparition and then proceeded to the Grotto to pray. After praying, Latapie simply washed her hands in the water from the spring. Instantly, her hand became what it had been before the accident. She then returned home where she quickly gave birth.

Catherine Latpie’s miracle at the Grotto of Lourdes was recognized as an official miracle on January 18, 1862.

The Youngest Recipient of a Miracle at Lourdes

Justin Bouhort was born in Lourdes in 1856. Since birth Bouhort was a sickly child. By age two—the age of his miracle cure—he still could not walk, suffered from malnutrition (as a result of previous infections), intellectual disability, and consumption (also referred to as tuberculosis).

While watching her son suffer in agony and close in on his young death, Justin’s mom decided she should take him to the Grotto of Lourdes to plead for help from the Blessed Mother Mary. At the time, however, there were notices to the public that prohibited visitation to the Grotto.

Despite the notices, Justin’s brave mother, prayed in front of the Rock, with her ailing child in her arms. After her prayers, she took him to the hollow where she bathed her son as onlookers protested—accusing her of killing her child whom she was trying to save.

She took Justin out of the water and ventured back home. On the journey home and upon arrival, Justin was still labored in his breathing but was sound asleep. Nevertheless, the faith his mother had in the Blessed Virgin’s ability to cure her son was unwavering. Justin then recovered quickly and even began to walk!

Bouhort grew into adulthood healthy. He attended the canonization of Bernadette in Rome in 1933 before passing away in 1935.

Justin Bouhort’s miracle at the Grotto of Lourdes was recognized as an official miracle on January 18, 1862.

The Oldest Recipient and Most Recently Recognized Miracle at Lourdes

Sister Bernadette Moriau was born on September 23, 1939, in the North of France. At the age of 19, Moriau entered the Nantes Convent to join the congregation of the Franciscan Oblate Sisters of the Sacred Heart of Jesus, and she graduated in 1965 as a nurse. However, at the age of 27, she began experiencing pain in her low back and underwent 4 unsuccessful surgeries. By 1975, Moriau was no longer able to practice her nursing. Unfortunately, this would only be the beginning of her many other ailments that would follow.

In 1992, she was fit for a spinal neurostimulator.

In 1994, she began morphine medication.

In 1998, she was diagnosed with sphincter dysfunction.

In 1999, she began wearing a cervical-lumbar corset that would become a permanent necessity.

In 2005, her left foot was put into a splint after developing equinus contracture.

Finally, in  February of 2008, she made her pilgrimage to the Grotto of Lourdes.

While retracing the steps of Bernadette Soubirous on the 150th anniversary of the first Marian Apparition in Lourdes, Moriau says that she could feel the presence of little Bernadette, the Blessed Mother, and Jesus. While in great pain due to her many medical issues, she completed her pilgrimage with a full heart—without being in search of a miracle for herself.

On July 11, 2008—at the same time as the Eucharist procession in Lourdes was taking place—Moriau had her hour of adoration at her community chapel. It was there that a warm sensation fell over her. She felt called to take off all assisting medical devices and noticed that her foot had returned to normal. She then stopped taking her medications and ceased using the spinal neurostimulator.

Sister Bernadette Moriau’s miracle at the Grotto of Lourdes was recognized as an official miracle on January 10, 2018. 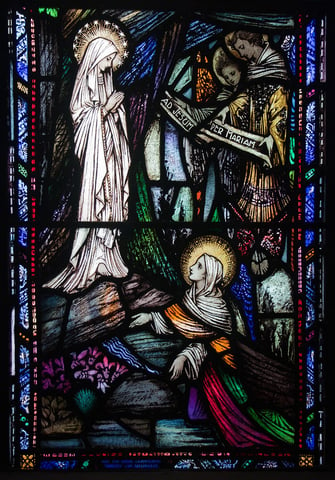 St. Bernadette’s eighteen visions of the Blessed Virgin at Lourdes have led to countless healings and miracles: seventy recognized miracles by the Lourdes Medical Bureau, there are thousands of other healings that are just as beautiful such as the cure of Marie Bailly, John Traynor, and Gabriel Gargam.

While it may be easy to associate her with healing, St. Bernadette also teaches us the beauty of suffering. Her short life was plagued by many ailments of her own, however she believed that suffering here on earth only prepares us for our life following this one:

“Why must we suffer? Because here below pure Love cannot exist without suffering. O Jesus, Jesus, I no longer feel my cross when I think of yours." —St. Bernadette

To learn more about St. Bernadette and the 70 miracles approved by the Bureau, visit the website of the Sanctuary of Our Lady of Lourdes.

The Struggle Within: Moral Conversion Series #3

Did you ever have the feeling that there were two opposing forces within you? Well you’re not alone. In our last article, we ...
Start Reading
Magis Center November 11, 2019 3 min read

Fr. Spitzer on Why Some Miracles are Denied

How could God allow that tragedy? Why didn’t He save her? I’ve been praying, why haven’t I been healed?
Start Reading
Magis Center March 2, 2021 11 min read

The 5 Transcendentals (And How they Provide Evidence for the Soul)

Around 400 BC, Plato and Aristotle recognized three transcendental desires or “properties of being”: the good, true, and ...
Start Reading