Jesus’ Empty Tomb: Not the Only Empty Tomb in Early Christianity

When you hear the words, "empty tomb," the Resurrection of Jesus is what might immediately come to mind. However, the Acts of the Apostles describes two other empty tombs.

In this article, we look at what these three empty tombs had in common and the people who were corrected by each empty tomb.

The First Empty Tomb to Correct the Chief Priests

The guards’ witness to Jesus’s resurrection stunned the Jewish chief priests so much, that upon assembling, the chief priests paid off the guards: “Tell people, ‘His disciples came by night and stole him away while we were asleep’” (Matthew 28:13).

The “chief priests” were all close family members; most likely, the phrase referred to Annas, Caiaphas, John, and Alexander (cf. Acts 4:6). They basically acted like a mafia and were answerable to no earthly power.

One of the priests or courtiers leaked to somebody the pay-off, and word eventually reached the Christians. With the public witness of two more empty “tombs” about to occur, it was inevitable that the truth about the first empty tomb would become more public.

In the meantime, the guards understood how power works; it’s why they went first to the Jewish priests instead of Pilate. If such a Cosa Nostra “got Jesus dead” with false testimony and blood money, then don’t think they won’t “get you dead,” too. Snitches get stitches. With an empty tomb and missing body for which they were responsible, they knew they were dead men walking. 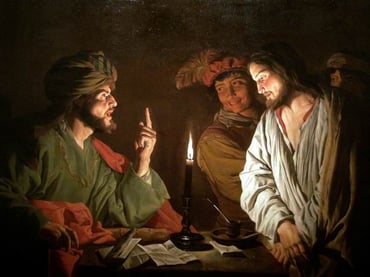 After the pay-off, the chief priests immediately promised the very shaken-up guards what those soldiers needed to hear: “If this comes to the governor’s ears, we will satisfy him and keep you out of trouble” (Matthew 28:14). When the mafia says they can protect you from Pilate the governor, then you know you better leave the gun and take the cannoli. Likewise, when the men-in-black show up within a government compound and act with impunity, you know the cost of going against their advice when they tell you: “It was just your imagination. Fo’get about it. Capisci?”

After their frightening episode with angelic beings and then the threat of Pilate punishing them, the guards happily took the money along with the promises of protection from la mia famiglia. After all, money and protection from the mafia for keeping your mouth shut or torture and death?

A little coin quickened the transformation of the guards from soldiers to wise guys: “What angels? That’s crazy! There is only swamp gas and inversion of light from Venus. We were asleep. Must have been those dirty and good-for-nothing fishermen.”

A Second Empty Tomb to Correct the Sanhedrin

Poor Sanhedrin and mafia leadership. They messed with a dead man they couldn’t keep dead. Jesus decided to play with them for trying to suppress the truth.

Meek and humble, secure in Himself, a resurrected God-man doesn’t feel the need to play at the level of criminals or an eye for an eye. Because Jesus is Wisdom and Power, He just kept humiliating the liars and giving them more empty “tombs” and more bewildered guards. After all, Jesus is in it for the long game and the salvation of souls; bringing billions, maybe trillions or more, into the family of God for ages to come. 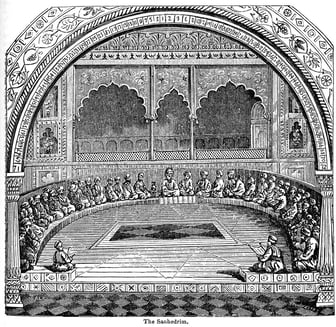 Not long after paying off the guards—and tired of the Apostles contradicting them with miracles and preaching Jesus’s resurrection—the Sanhedrin had the Apostles thrown into prison. Here it gets even more funny to watch the fake news blow up in the face of government controllers.

The next day, when the Sanhedrin goes to hold the trial, the officers reported to the chief priests and additionally all of the Sanhedrin and the Senate of Israel: “We found the prison securely locked and the sentries standing at the doors, but when we opened it we found no one inside” (Acts 5:23).

The exact same story of the Resurrection and the empty tomb, but this time with more missing bodies, and more leaders of Israel hearing about missing bodies. The New Testament is clear: an angel of the Lord had come and released them and told the Apostles to go back to preaching in the temple precincts (Acts 5:20-21).

In prison, a sealed tomb or cell for the living, an angel “opened the prison doors” and released the Apostles at night. More technically, they were probably taken into the holy angel’s “higher dimensions” (between time and eternity) from which angels act and then released outside again in the temporal world of Jerusalem (as the next section will elaborate). This would explain why the sentries—still standing at the doors—saw nothing of the Apostles’ deliverance but were left with an empty cell.

This episode had all the same symbols of the resurrection: guards, physical bodies, tombs (prisons), and the same chief priests were involved. The Resurrected Lord was not going to let the memory of his empty tomb escape the Sanhedrin with a payoff to scared guards. Now there were more guards, clearly awake, and more witnesses to hear about an empty prison; an empty tomb for the living.

Jesus, the head of the Church, had given a sign of what he would do for all his members in the future; reviving all of us from the tomb. Simultaneously, he embarrassed the corrupt leadership who originally condemned Him to a shameful death and so revealed all of their bribes and blood money.

A decade later, the Sanhedrin and all the offices involved in Jesus’ sham trial needed another reminder of how Jesus’ tomb really got empty. The murderous office of the kings of Jerusalem—from Herod the Great through Herod Antipas and Agrippa—still needed correction.

Upon the murder of the first martyred Apostle, James the Greater, Herod Agrippa* wanted to please the Jews further and had Peter arrested. It was Passover in Jerusalem, and, like Jesus, Peter was thrown into a tomb, a prison. Clearly, the word had gotten out that throwing Christians in tombs was risky for embarrassing public relations.

Prepared to stop embarrassment at all costs, Herod had four squads of soldiers guarding Peter at the prison (cf. Acts 12:4). A third embarrassment to the corrupt leadership would not be allowed. Not only were there guards and sentries at the prison door, but Saint Peter was also bound with two chains and slept with one guard on his right and another on his left (cf. Acts 12:6). Around the 10th Anniversary of Jesus’s Passover, another reminder of the Resurrection of Jesus Christ would be given to the so-called “kings” of Jerusalem.

An angel of the Lord appeared to Saint Peter in the cell while the guards were next to him. The angel woke him and the chains fell from Peter without the guards seeing anything. Of course not, the presence of an angel affects a person’s “dimensional” reality. Peter was lifted by the angel between the temporal and higher realities of aeveternity. Most likely it was for this reason that no one could “see” his exit and nothing earthly could hold him.

It was so surreal, at first Peter thought it was a vision as he followed the angel out of the prison. “When they passed the first and second guard, they came to the iron gate leading into the city…and the angel left him” (Acts 12:10). Peter then realized it was real as even the house he went to was in complete shock at his appearance and escape (Acts 12:11-17). It actually happened within the historical world and not just in Peter’s mind. 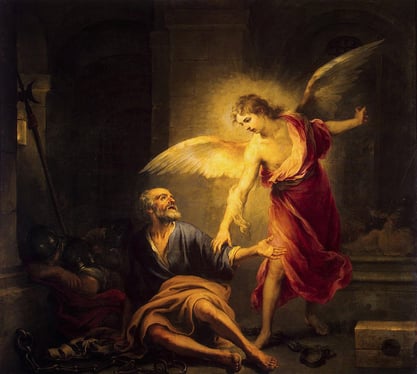 Herod knew Peter’s mysterious escape was real and so did the poor sentries. It was as real as Jesus’s Resurrection. “Now when the day came [to try Saint Peter in the king’s court], there was no small stir among the soldiers over what had become of Peter. And when Herod sought for him and could not find him, he examined the sentries and ordered that they should be put to death” (Acts 12:18-19). The mafia protection was over.

At the Resurrection of Jesus, the first sentries were paid to tell lies as their lives were threatened and coverups were promised. The last set of sentries had to pay with their lives for all the lies of a corrupt government.

“Beware of the Leaven of the Pharisees, which is hypocrisy. Nothing is covered up that will not be revealed. Whatever you have said in the dark shall be heard in the light, and what you have whispered in private rooms shall be proclaimed upon the housetops” (Luke 12:2-3). Herod also paid the price by the hand of an angel who struck him “because he did not give God the glory; and he was eaten by worms and died” (cf. Acts 12:23).

From the first payoffs and denials of Jesus’s Resurrection, corrupt men hid the truth from the people. They bought fake news and suppressed the truth through intimidation and murder.

The last set of sentries died in witness to the truth of Peter’s Gospel that Jesus is the Son of God (cf. Mark 1:1). Working for corrupt governments cost them their lives. Hopefully, they listened to Peter and the Gospel before Peter fell asleep between them.

In the end, the bribe that the first set of soldiers received from the priestly mafia ended with the death of the last set of sentries who were present at signs of the Resurrection of Jesus the Christ. 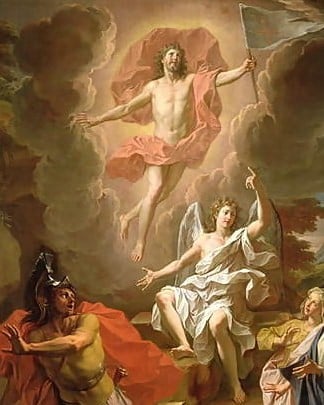 Everything Hinges on the Tomb Door: If the Resurrection did actually happen, that event must be viewed as the most important event in human history. There’s really no middle ground here.

Aesthetics and Spirituality Part IV: Tombs: For eras, humans have created monuments and reliquaries as links with the afterlife. Their efforts attest to an understanding about the soul’s immortality.

A Catechesis for 'God Butchers': The Metaphysics of Time and Eternity: Author Matthew Tsakanikas discusses fighting the new atheism—'God Butchers'—in the wake of suffering, darkness, and pain.

*Thanks to Al Lehnen for helping me distinguish Antipas and Agrippa at James’ death. 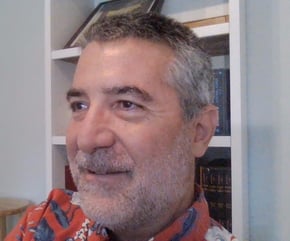 Dr. Matthew A. Tsakanikas completed graduate studies in Rome with the John Paul II Institute for Studies on Marriage and Family at the Pontifical University of the Lateran. His works have appeared in: Communio: International Catholic Review; Logos: A Journal of Catholic Thought and Culture; Homiletic and Pastoral Review; Veritas Amoris Review; Catholic World Report; Spirit Daily; New Advent; and other educational sites. He is a professor at Christendom College and an advisor with Magis.

Young People Are Leaving the Church—Can We Turn the Tide?

Everything Hinges on the Tomb Door

If the Resurrection never happened, then the whole of Christianity is a fraud.
Start Reading
Magis Center January 27, 2023 5 min read

5 Catholic Apologetics Questions Students Ask (and How to Answer Them)

Whether you’re a religious education teacher, a DRE for a parish, or even a parent, you may have been asked one or all of the ...
Start Reading