Since the turn of the millennium, the 17th-century Roman artist Artemisia Gentileschi has become something of a cause celebre. She has been featured in several novels and stage plays; she has inspired an opera and a British miniseries; and she was the subject of a 2020 feature documentary titled Artemisia Gentileschi: Warrior Painter. Her 1620 painting Judith Slaying Holofernes, perhaps her most famous work, is one of the most admired and photographed artworks in Florence’s Uffizi Gallery. Among young art aficionados today, her name shines with a glamor almost equal to those of Leonardo da Vinci, Caravaggio, or Michelangelo. 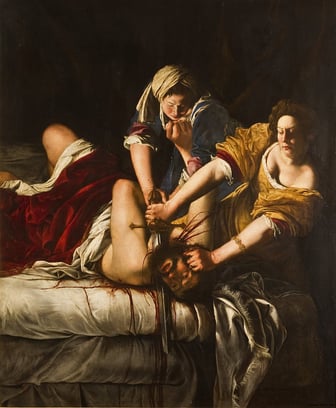 So. . . why is Artemisia Gentileschi, a Baroque-era painter of biblical scenes, having “a moment?” Is it just that her talent is finally being discovered, or is there something more?

One reason for Gentileschi’s current popularity is her precocious, feminist spunk. She was one of the first woman artists in history to enjoy a high-profile professional career. She also rose above great adversity, having been a victim of rape and a subject of public scandal. And perhaps most importantly, she made feminine strength the subject of her major works, including paintings of the biblical heroines Judith, Jael, Esther, Mary Magdalene, and Mary the Mother of Jesus.

Throughout her career, Gentileschi boldly depicted these biblical women in fresh ways. Her masterpiece Judith Slaying Holofernes is a good example. The biblical story of Judith recounts how this brave Jewish widow talked her way into an enemy camp and managed to slay Holofernes, its leader. Though the men in Judith’s village wanted to surrender, Judith insisted on trusting in God and then allowed herself to become God’s vessel. With compelling words and a commanding, spiritual presence, Judith won the trust of the enemy leaders, who hung on her every word. When they let down their guard, she struck.

Judith had been a favorite subject of artists for some time, and the Baroque master Caravaggio painted a renowned version of the Judith story in 1599. But Caravaggio could not “get inside the head” of the biblical heroine as effectively as the younger Gentileschi. Like other male artists of the time, Caravaggio saw Judith from the “outside,” highlighting her enticing looks rather than her faith and bravery. He even used a famously “sexy” prostitute, Fillide Melandroni, as his model! For male painters like Caravaggio, Judith’s power lay in her (assumed) seductiveness, rather than in her poise and confidence. That’s why Caravaggio’s Judith is rather prissy, wrinkling her pretty nose at her unpleasant task. Nearby, Judith’s handmaid Abra goggles with a look of hungry vengeance. The contrast makes Judith look especially prim and detached. 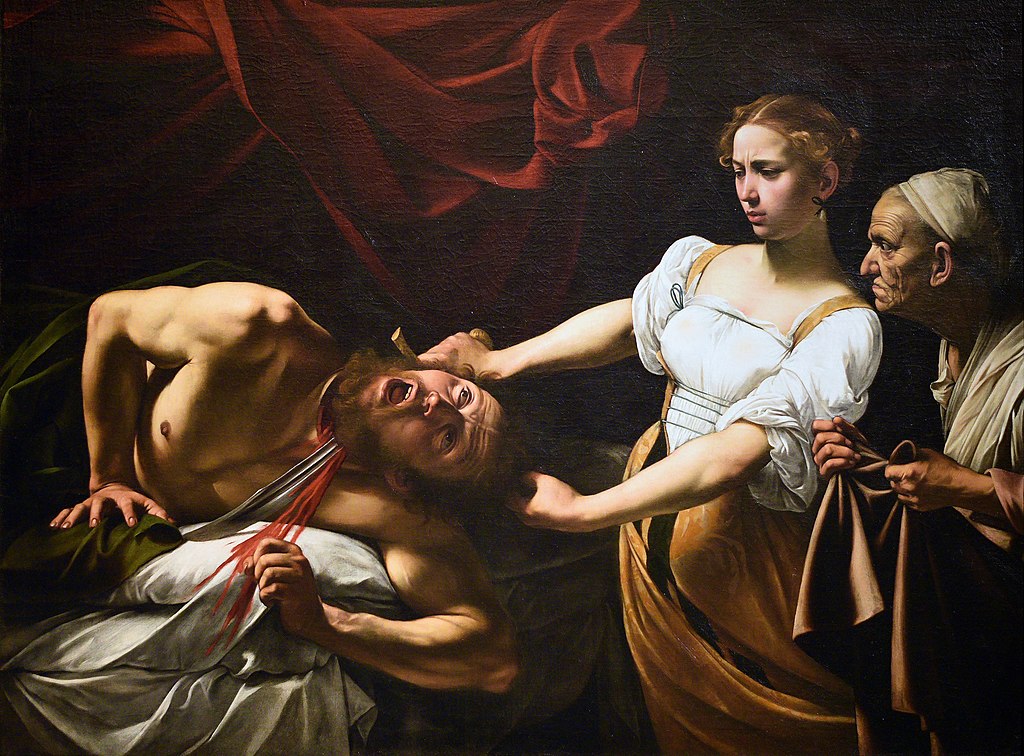 In Gentileschi’s version ten years later, however, everything has changed. Gentileschi’s Judith is strong and purposeful, in clear command of her situation. Her face is resolute, her arm is forceful, and her shoulders strain with power. This Judith, one imagines, captivated Holofernes with her poise and authority, in addition to her beauty. Meanwhile Judith’s handmaid, at the top of the picture, is an equal partner in the work. She exerts youthful strength downward to pin the hapless Holofernes, who flails with terror and incomprehension.

Gentileschi’s Judith is not a beautiful pawn—a piece of bait in a drama she can’t understand. She is rather a cunning and determined partner in God’s plan, aware of her powers and grimly determined to see things through. In short, she is just like the Judith of Scripture, who is smart and bold, willing to trust in God and try something crazy while the men in her tribe quake with fear.

Since the launch of her professional career in 1610, Artemisia Gentileschi devoted herself to examining holiness from a female point of view. She brought to this effort the heroism of her life experience as a woman, first as the survivor of a sex crime, and later as a mother both strengthened by childbirth and seasoned by sorrow (four of her many children died before the age of six).

Indeed, almost all of Gentileschi’s surviving paintings feature woman protagonists, including the aforementioned biblical heroines, as well as the female saints Cecilia, Nicea, and Catherine of Alexandria—all Early Christian martyrs. In all of her paintings, Gentileschi endows her heroines with resolve, personality, and intelligence. They are not simply “pretty faces,” but fierce and sacrificial mothers, wives, defenders, and proclaimers. Like Judith, who knew her femininity could get her places men couldn’t go, Gentileschi’s other heroines live into their specificity as women of God.

Take, for example, Gentileschi’s 1615 portrait of St. Catherine of Alexandria. 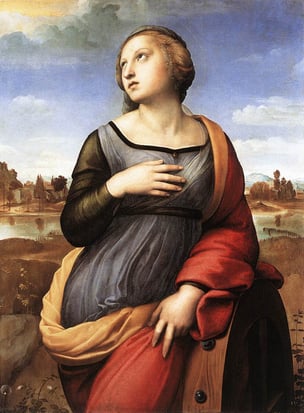 This remarkable woman saint was known for strength upon strength. In the world’s eyes, she was royalty (a provincial “princess”). She was also marvelously intelligent, able to defend the Christian faith intellectually against the pagan emperor’s greatest scholars. And she was, of course, brave, willing to accept martyrdom rather than recant her faith.

Many earlier pictures of St. Catherine, however, downplayed her fortitude. In Raphael’s admittedly beautiful Renaissance version, for example, St. Catherine twists and gestures in graceful self-defense while raising limpid, searching eyes to the sky. Guido Reni’s several Baroque pictures of St. Catherine are even more pleading and—for lack of a better word—pitiful. These images highlight Catherine’s vulnerability, rather than her determination.

In her St. Catherine of 1615, however, Artemisia Gentileschi showed a resolute, queenly person determined to follow through on God’s plan. This formidable woman (modeled on Gentileschi herself) looks upward with a knowing, determined, and somewhat scrutinizing gaze. Like Raphael’s Catherine, her hand is raised to her breast, but here it’s not a gesture of distress, but devotion. Like Judith before her, Catherine knowingly used her gender to do what men couldn’t as easily do (pique an emperor’s curiosity; provoke smug pagan scholars). She was chosen for her moment in history precisely because of her gender—not despite it. 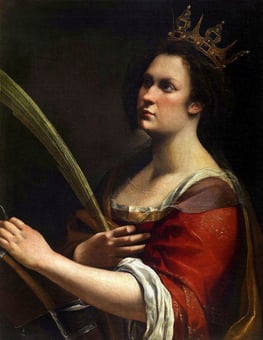 One of Gentileschi’s most moving pictures is her 1613 painting of the Virgin Mary and baby Jesus. No doubt Gentileschi, who in 1613 gave birth to—and tragically lost—her first child felt connected to this image. Like Mary, Gentileschi had also lost a beloved son.

Thus, in her 1613 painting, Artemisia Gentileschi highlights the mother-child gaze—that crucial eye-lock—that lies at the heart of all motherhood, both physical and spiritual. It is in the mother’s eyes that the child is first seen, both actually and existentially, and it is under the mother’s recognizing and encouraging gaze that the young child finds his or her identity. It is this deep engagement of the mother—as the one who fully “sees” and fully empathizes—that accounts for the “soul-piercing” Mary experienced at the death of Jesus. 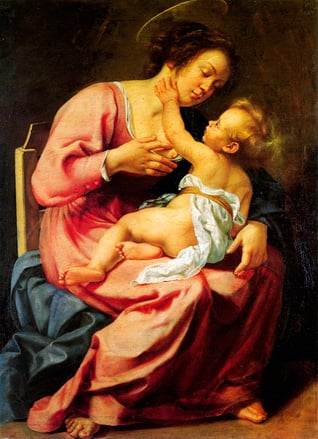 Despite her personal loss, Gentileschi does not, in this painting, flinch from the existential connection of mother and child. Here, as the young Jesus looks up with affection, Mary gazes down with knowing, confident tenderness. The wordless bond between mother and child (soon to yield nourishment through Mary’s breast) is natural and complete. These are persons united for life and beyond. And here, their bond is not eroticized or sentimental. It simply, deeply is—with a weight, rhythm, and simplicity all its own, as if from the foundation of the world.

Fortunately, as twentieth-century elite culture excavates feminist icons from the past, it encounters religious artists like Artemisia Gentileschi. Gentileschi’s hard-won, “feminist” confidence was not at odds with her deep Christian worldview. Instead, she sought to expand and enrich what it meant to be a woman in a Christ-redeemed world, as the Holy Spirit worked (and still works) to help all things gradually become what they’re meant to be.

A few days ago, while waiting for a London subway train, I saw the following quote:
Start Reading