Art for the Ages: Botticelli and the Divine Human

What does it mean to be “made in the image of God?”

The Judeo-Christian tradition is unique among ancient belief systems for its conviction that humans are “made in the image of God.” This condition is proclaimed in the Old Testament book of Genesis and continues in the New Testament teachings of Jesus and His apostles.

Somehow, unlike any other beings in the universe, humans are “godlike.” They reveal in their very essence what nothing else can. When one looks at a human, one looks at an unparalleled image of divinity. And though the scientific worldview of modernity seems to reject such notions, the idea of “made in the image” remains influential. It accounts for much humanitarian effort, and it explains the moral force of the great civil rights movements.

The Neoplatonic Influence During the Renaissance

During the Renaissance, a time of both growing material prosperity and rapid scientific advancement, artists began to consider more concretely what it meant to be “made in the image of God.” Many of those artists were influenced by a philosophical movement called Neoplatonism that sought to know the mind of God.

According to the Neoplatonists (who took their inspiration from the ancient philosopher Plato), God’s “imagination,” as it were, contains flawless images of everything He has made—including the human body, which is the crown of His creation. The highest goal of philosophers and artists was to gain imaginative access to those flawless images. In so doing, they would grow in their ability to share truth, goodness, and beauty with everyone.

One artist who the Neoplatonists influenced was Sandro Botticelli—one of the most beloved of the Renaissance Old Masters. Botticelli was a prolific and religiously devout artist who left behind many beautiful paintings of Mary and the baby Jesus. He also painted many complex, mystical scenes of biblical events. But he is best known for his Birth of Venus, painted in 1486. 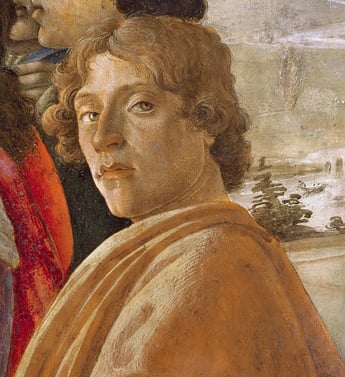 This famous image, showing a bashful, nude goddess standing on a large scallop shell, has been copied, parodied, and emulated thousands of times. Everyone has seen it. In fact, it may be so familiar to the point of cliché! Yet, generation after generation, we are still captivated by its beauty. My college art history students are invariably enchanted by this image, often choosing it as a topic of research. When I take students to Florence to see the painting in person, they stand in awe and can scarcely be torn away.

The central figure in Botticelli’s Birth of Venus, Venus herself, is a product of Neoplatonic striving; in painting her, Botticelli aimed for the divine image in the mind of God. The divinity of the image is reflected in the painting’s classical symbolism. According to ancient myth, Venus (in Greek, Aphrodite) was born full-grown from the foam of the sea—pure and shimmering. For Botticelli, that same ocean spray—effervescent, pristine, ethereal—was a metaphor for the sparkling expanse of the divine mind: a place of mysterious, endless life. Out of the depths of divine creativity, God offered Himself—His very portrait—in the form we call human, both male and female.

How fitting that Botticelli cast his own Neoplatonic ideal, in The Birth of Venus, as actually divine; she is an immortal goddess! Here an ancient symbol, the Greco-Roman goddess of love, evokes both timeless splendor (the forms of God’s imagination) and future promise (our own heavenly fulfillment). Venus is us as we are meant to be.

In an earlier blog post, I discussed the buff, perfect bodies of Michelangelo Buonarotti, the famous creator of the Sistine Chapel ceiling. I argued that Michelangelo’s impossible figures are not meant to be ordinary humans. Instead, they’re deliberately superhuman, at once bulging and floating, at once perfect and strange, because they’re supernatural. They’re more than the present, mortal and finite—they’re prophetic! They suggest what “no eye has seen and no ear has heard:” the human being fulfilled in its heavenly destiny.

There is something uncomfortable, almost uncanny, about Michelangelo’s figures precisely because they are imbued with such transcendent ambition. And in fact, Michelangelo, like Botticelli, was influenced by the Neoplatonists.

Botticelli’s Venus, like Michelangelo’s figures, is also rather uncanny. Upon further inspection, we realize that she does not conform to typical beauty standards.

Her proportions are strange.

She does not have an “hourglass” figure.

Her shoulders slope straight downward, and her feet and hands are rather large.

But she is splendid nevertheless—emanating serenity and a sort of divine light. Somehow, Botticelli has captured an image of beauty that does not exactly translate into familiar, three-dimensional reality. The result is something ethereal and impossible but still solid. Still embodied. Botticelli’s paradoxical Venus is both everyone and no one. She is a ravishing suggestion, simplified and stylized, of something beyond exact description. She is a kind of “fleshed out,” divine calligraphy.

And She is Naked

Like Michelangelo’s nude figures, Botticelli’s Venus shows that the Old Masters were not prudes. They did not think the human body was filthy or lowly. Nor did they think our bodies were “animal” appendages to be tamed by the mind. Instead, human bodies, properly understood, were radiant through and through with divine meaning. Accordingly, their unencumbered nudity could be revelatory—provided that it was treated with respect. 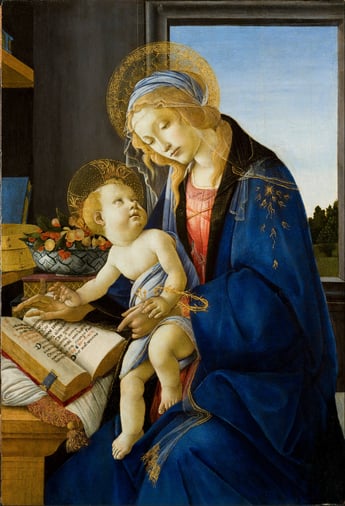 The Virgin and Child by Sandro Botticelli / Public domain, via Wikimedia Commons

Botticelli’s Venus, related stylistically to the artist’s many pictures of the Virgin Mary, is modest and dignified. Her nudity is natural, not exhibitionist. She indicates the possibility of a fulfilled humanity that stands naked and unashamed before God, comfortable in its own skin, in full possession of its heavenly destiny.

The Theme of Destiny

Destiny is another central theme of the Renaissance Old Masters. Today, we are likely to think of ourselves as random collections of atoms with outlines that fluctuate and mutate according to evolutionary conditions. We don’t believe the human form has any particular dignity or meaning. We view ourselves as accidents—with accidental shapes, accidental powers, accidental “loves,” and accidental minds. We do not respect ourselves. Accordingly, we may punish or even harm ourselves in pursuit of social approval or even fleeting pleasure.

In the face of this modern despondency, Botticelli asks us to take heart. Because we are, like Botticelli’s Venus, images of God! Though we come in many sizes and colors, we all share her exalted humanity. In our various ways, under different skies, we all cast her sacred glow. 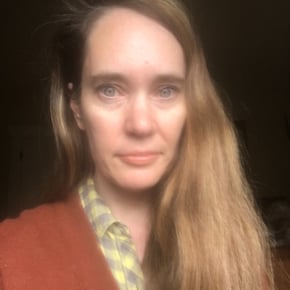 In his new book, The Moral Wisdom of the Catholic Church, Fr. Spitzer proves the importance of following the Church's teachings.
Start Reading
Lauren Woodrell

From its ancient origins to its religious takeover, All Hallows Eve has taken on a life of its own. Learn how many influences inspired the popular holiday.
Start Reading