Where Is Mary Buried?

We are not going to make you wait for the answer. Mary, the Mother of God, is not buried anywhere.

Instead, here is what happened. “…(T)he Immaculate Mother of God, the ever Virgin Mary, having completed the course of her earthly life, was assumed body and soul into heavenly glory.”

Known as the Assumption of Mary, this is an official dogma of the Catholic Church, being solemnly proclaimed in 1950 by Pope Pius XII in an encyclical called Munificentissimus Deus. Though it is a required belief for Catholics, the teaching of the Assumption of Mary—like other Marian dogmas such as the Immaculate Conception and the Perpetual Virginity of Mary—has faced significant opposition for many years.

For Catholics, it is vital to understand the reasoning behind the dogma, and not merely on the level of apologetics, but on a very personal one. The Assumption of Mary has profound implications because it illustrates not only who Mary is, but who God is. 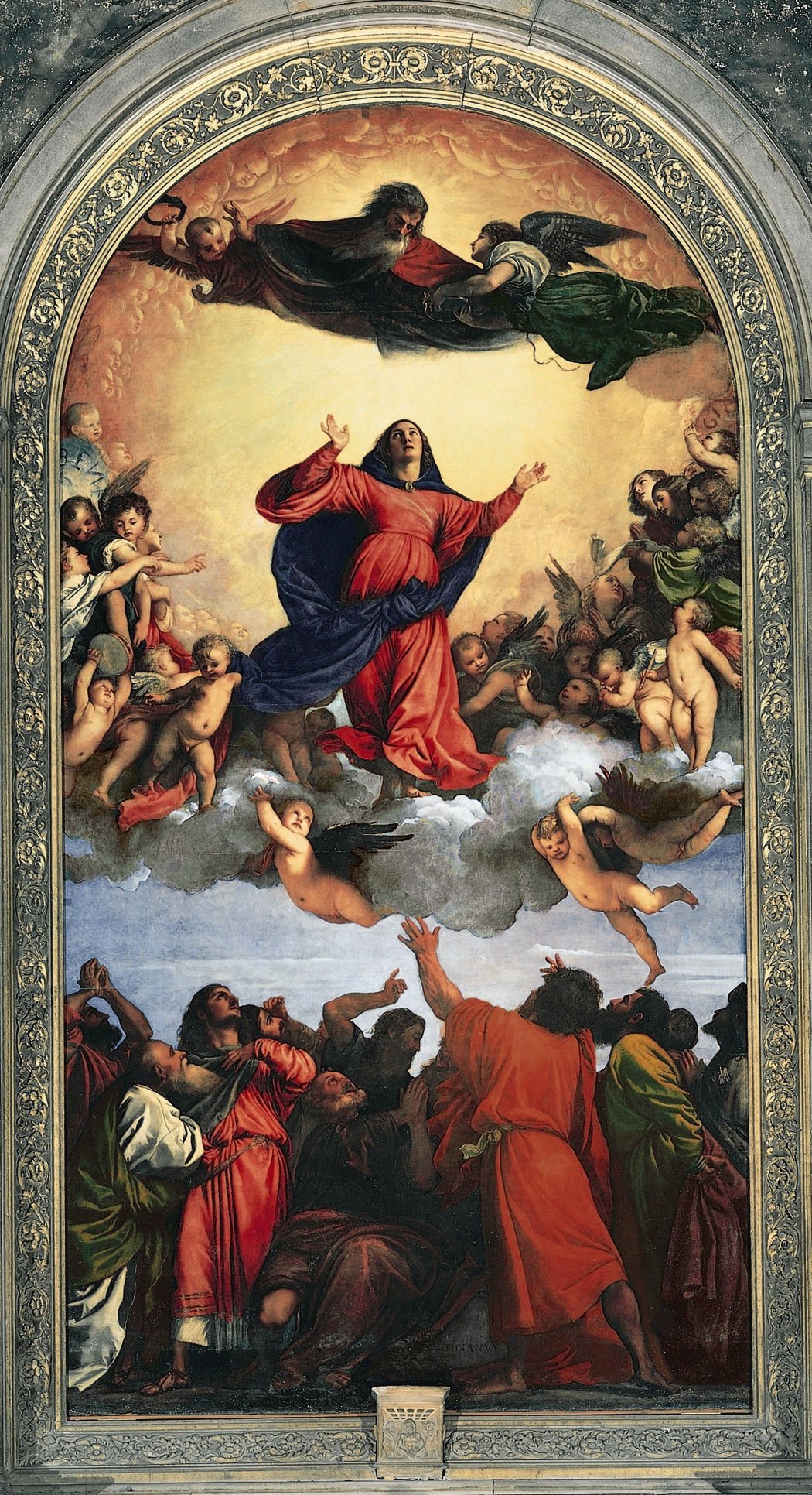 Titian’s "The Assumption of the Virgin"

It is a common slur against the Catholic Church that various popes “invent” dogma. The charge of “invention” is often based on the lack of an explicit Scriptural event.

It is true that Mary’s Assumption is not explicitly mentioned in the Gospel as an historical event. For many people, that closes the case. Many of those in the Protestant tradition are circumspect, even dismissive, of any theological belief that is not specifically mentioned in Scripture—adopting the view (“sola Scriptura”) that there can be no theological certainty without the written Gospel. Curiously, however, that is a viewpoint unshared by the earliest Christians who walked with Christ. As Bishop Fulton Sheen reminds us,

“The Church was spread throughout the entire Roman Empire before a single book of the New Testament was written. There were already many martyrs in the Church before there were either Gospels or Epistles. An authoritative and recognized ministry was carrying on the Lord’s work at His command, speaking in His name as witnesses of what they had seen, before anyone decided to write a single line of the New Testament. —Fulton Sheen, The World's First Love

But if Mary were assumed into Heaven, that event surely would have been recorded in Scripture, right? No.

It may be frustrating, but Sacred Scripture does not work that way. Notwithstanding its title, The Acts of the Apostles does not include all the acts of the Apostles. Many of the actions of the Apostles—including the actions of Mary, Queen of the Apostles—are simply unrecorded. If you consider that to be a glaring omission, consider this: other than the infancy narratives and the incident in the Temple at the age of twelve, Scripture is altogether silent on thirty years of the life of Jesus. The private life of Christ was just that: private. The Second Person of the Trinity walked the earth for thirty years, but Scripture has very little to say about it. Are we prepared to say, however, that nothing important happened during these three decades? What sort of Christian would make that bizarre claim?

Even in reference to His public life, not everything that Jesus did was Scripturally recorded. Considering the fact that they largely focus on a rather lengthy period of three years, the Gospels are extraordinarily brief. (The longest Gospel can be read in about an hour.) Scripture does not provide an exhaustive account of every detail in the life of Christ, nor does it make the claim that it does. In fact, the Gospel of John claims the opposite:

Now Jesus did many other signs in the presence of the disciples, which are not written in this book; but these are written so that you may believe that Jesus is the Christ, the Son of God, and that by believing you may have life in his name. —John 20:30-31

And that leads us to a series of very interesting questions when it comes to the Assumption of Mary.

There are those who object to the Assumption not on Scriptural grounds, but on historical grounds—that the entire notion was whimsically pulled out of a hat by Pope Pius XII in 1950. Was it?

Though it is certainly a beautiful document in its own right, Munificentissimus Deus stated something that Catholics already believed—and had believed for quite some time. If you had asked a Catholic in 1940 whether the Catholic Church taught the doctrine of the Assumption, he very likely would have answered in the affirmative. In fact, that’s also true if you had asked a Catholic in 1840 or 1540 or 1140.

By 1950, Catholics had already been praying the Assumption as one of the Glorious Mysteries of the Rosary for centuries. 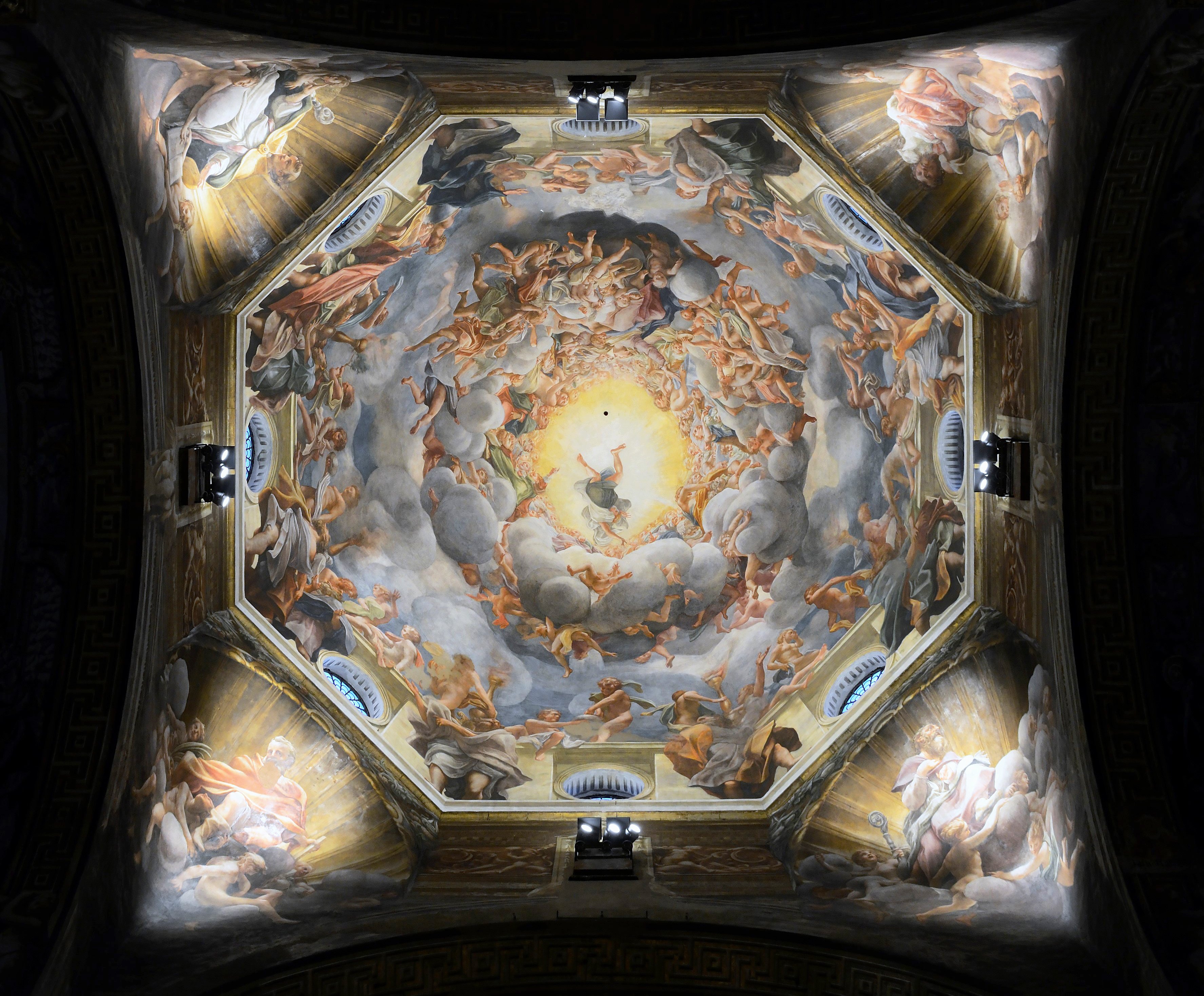 By 1950, ancient Catholic churches all around the world had been named in honor of Mary’s Assumption. American commentators who considered the Assumption to be a novelty could have looked in their own country to discover that the Basilica of the National Shrine of the Assumption of the Blessed Virgin Mary (the first cathedral ever built in the U.S.) was consecrated in 1821.

Many commentators such as Dr. Matthew Levering, author of Mary’s Bodily Assumption, illustrates that by the time of Pope Pius’ Munificentissimus Deus, the Catholic Church had already been liturgically celebrating the Assumption of Mary for at least thirteen hundred years. That’s no minor point, especially considering the old Christian maxim, lex orandi, lex credendi (the law of worship is the law of belief).

Theological Questions, or Lack of Questions

In the early 8th Century, Saint John Damascene posited the logic as to why Mary was assumed into Heaven. He writes,

The detractors of the Assumption insist that there is no biblical evidence for Mary’s Assumption, yet the prominent Christians who weighed in on the matter frequently offered Scripture as their primary basis of belief. Saint Albert the Great (1200-1280), for instance, advanced the idea that Mary, as the “New Eve,” was exempted from Eve’s fourfold curse found in the third chapter of Genesis. Saint Albert writes, “From these proofs and authorities and from many others, it is manifest that the most blessed Mother of God has been assumed above the choirs of angels. And this we believe in every way to be true.”

Other saints offered explanations and insights, including Saint Robert Bellarmine (1542-1621) who asked: "And who, I ask, could believe that the ark of holiness, the dwelling place of the Word of God, the temple of the Holy Spirit, could be reduced to ruin?” Saint Francis de Sales (1567-1622) asked the endearing question, “What son would not bring his mother back to life and would not bring her into paradise after her death if he could?”

As a response to non-Christians who mock the notion of the Resurrection, Biblical scholars often respond by asking, “What happened to Christ’s body?”

If Jesus had faked His death, he would have needed the soldiers to be in on the conspiracy. And, considering His scourging and crucifixion by those same soldiers, that’s pretty tough to believe. Besides, you can only fake your death for so long, until you eventually experience a real death you cannot fake.

There are parallel questions we might ask about Mary to those who don’t believe in Mary’s assumption.

Did the Roman soldiers steal Mary’s body? If so, why? They didn’t seem to have any interest in stealing the bodies of the Apostles. Why hers?

Did the Apostles abscond with Mary’s body? It is true that Christians reverence the bodies of the saints, and when they did so, they took the bodies to a safe place: the Roman catacombs. Here’s the problem with that theory. The tomb would have been marked with Mary’s name and virtually every Christian on earth would have known about it. There would have been pilgrimages to visit her body.

There also would have been bodily relics, just as there are bodily relics of other saints and martyrs. But as Pope Pius points out, “the Church has never looked for the bodily relics of the Blessed Virgin nor proposed them for the veneration of the people.” That’s a fact worth pondering. For those unfamiliar with the Catholic faith, we can point out that bodily relics of the saints (called “first class” relics) are heavily sought after. It is strongly recommended that every church altar have an imbedded first class relic. The idea that Catholics for centuries knew that Mary’s body lay in the catacombs but didn’t bother to hunt for a relic—or even thought it worthwhile to determine her final resting place—is almost unthinkable.

The truth is that the early Christians acted like people who thought that a search for Mary’s body was a waste of time. For a Christian, that would constitute an extraordinarily odd response—unless of course, they believed that Mary’s body was already in heaven.

At present, two shrines claim to be the place of Mary’s dormition (falling asleep) or death. They are very beautiful and contain many religious items, icons, and censors. But neither one claims to contain something that a final resting place would contain: a body. All each claims is that it was the final place she fell asleep or momentarily died before she was assumed body and soul into Heaven.

All this should add up to making even skeptics wonder, or at least spark some curiosity. But Catholics need not be curious or wonder. We believe that the body and soul of Mary is in heaven, in the presence of her divine Son.

For Catholics, the Assumption of Mary is a cause of great joy. In his book, The World’s First Love, Bishop Fulton Sheen notes that the world is in the throes of despair, but that the Church has a response. He writes that “the Mystical Body of Christ bids the despairing to gaze on the two most serious wounds earth ever received: the empty tomb of Christ and the empty tomb of Mary.” For us Catholics, the vision of the empty tomb should instill hope and delight in us. Jesus ascended into heaven to prepare a home for us, and Mary was assumed into heaven, ensuring that our Heavenly Mother will be there when we arrive.

Everything Hinges on the Tomb Door

Startling Encounters: How did the early Christians react to the Resurrection?

John Clark is an author and speechwriter. He has authored two books on fatherhood and written hundreds of articles and blogs about Catholic family life and apologetics in such places as The National Catholic Register, Seton Magazine, and Catholic Digest. A graduate of Christendom College, John and his wife Lisa have nine children and live in Florida.

The Church is fastidious when it comes to validating miracles, and leaves no stone unturned. In this article, Fr. Spitzer ...
Start Reading