The Interior and Exterior Consequences of Original Sin

There are two major consequences of original sin (the fall of our first parents):

When our first parents committed the first sin, and a partial separation from God occurred, they lost the self-control that came from their strong sense of God’s presence, sacredness, and goodness.

The weakening of their awareness of God led to an increased sensitivity to their sensual desires and passions. These sensual desires, combined with egocentric desires, led to a strong interest in power, material possessions, sexual indulgence, and self-assertion (concupiscence).

Though the beauty, holiness, and lovability of God’s strong presence had diminished (allowing sensual and egotistical desires to grow more prominent to consciousness), God did not completely withdraw His presence from human beings. His numinous and sacred presence was still influential—and His influence through conscience and empathy could still be felt.

Indeed these influences still had more prominence than sensual and egotistical desires.

The consequences of our first parent’s sin continued to affect their progeny—generation after generation. This had two additional effects:

Prior to the time of Jesus, the influence of the evil spirit had become so prominent that the vast majority of humanity was pressed into servitude and slavery, and the vision of the goodness of every human being was almost completely eclipsed.

There was a callous disregard for the sacredness and goodness of human life, and the mentality of the Roman Coliseum—where people delighted in the shedding of innocent blood—became commonplace.

As Jesus put it, “Satan had become the prince of this world.”

Jesus saw His mission as driving Satan from his place of prominence. He had a plan to do this: to give His life of unconditionally loving self-sacrifice, His teaching about His Father and the primacy of love, and His Holy Spirit to influence and encourage us interiorly and exteriorly:

“Now is the time for judgment on this world; now the prince of this world will be driven out. And I, when I am lifted up from the earth, will draw all people to myself.” —John 12: 31-32

The Sacrament of Baptism

The sacrament of baptism has two incredible effects.

First, it incorporates us into the Church—the very mystical body of Christ—which would not only guide us through its teaching authority and the example of its saints but would allow the salvific intention and virtue of all of its members to course through the spiritual veins of one another.

Secondly, it gives us the Holy Spirit with all of His gifts to inspire, guide, and protect us—and to strengthen us interiorly to resist the temptation and deceit of the evil spirit and to help us contend with the effects of original sin. 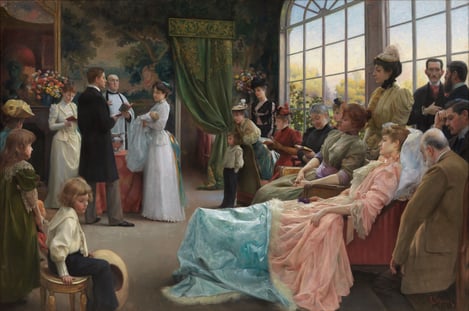 The Exterior Consequences of Original Sin

Many of the exterior consequences of original sin follow from the interior ones. Thus, we might expect that concupiscence (our weakened nature and the influence of the evil spirit) would create antipathy between us and God, us and one another, and even us and nature.

Only a few decades after the resurrection of Jesus, the Christian Church initiated public welfare, public education, and public healthcare on an ever-growing scale. By the time Constantine I issued the Edict of Milan (A.D. 313)—which stopped the persecution of Christians, gave them legal status, and (in some sense) preferential status—many of the Christian Church’s practices, with respect to education, healthcare, and public welfare had softened the cruelties of Roman culture and weakened the institution of slavery.

Constantine's dream in a 9th-century Byzantine manuscript from the National Library of France / Public domain, via Wikimedia Commons

Jesus had not only given humanity the means to contend with the interior effects of original sin but also its exterior effects as well.

To the extent that Christian evangelization is successful—and that the Christian Church remains faithful to the teaching of Jesus and His call to holiness—the interior and exterior effects of original sin will never rise to their former prominence. For as the mystical body of Christ increases, the influence of our weakened nature and the evil spirit (who works through it) will decrease.

The Final External Effect of Original Sin: Exemption from Death

There is one more external effect of original sin that must be considered: the loss of our exemption from death. God created the first human beings by infusing in them a unique transphysical soul which was meant to be eternal by its very nature.

Our bodies, which evolved over a long period of time, were significantly influenced by the presence of this transphysical soul—developing an ever more refined cerebral cortex to mediate the soul’s 12 capacities to our material embodiment. When God infused a soul into the first human being, the body took its lead from the soul—not vice versa—and so human beings were exempt from death. 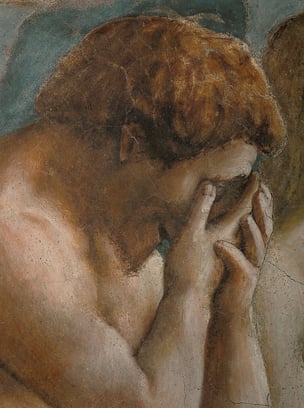 Head of Adam in The Expulsion from the Garden of Eden by Masaccio / Public domain, via Wikimedia Commons

Jesus’ redemptive self-sacrifice did not overcome the necessity for the body to die—but it did much more.

If we remain faithful to Him, He will glorify our bodies, divinizing, transforming, and spiritualizing them so that they resemble His own risen body.

An Important Effect of Original Sin—A Sacrifice Made for All

It is important to note that Jesus’ redemptive act is not reserved only for professed Christians—its effects for negating original sin and bestowing the resurrection extend to all human beings. It is also given to all who “seek God with a sincere heart, and, moved by grace, try in their actions to do His will as they know it through the dictates of their conscience—those too may achieve eternal salvation.”

In its Pastoral Constitution of the Church, the Second Vatican Council describes how the actions of Jesus help us contend with the lasting effects of original sin and how His saving work extends to all people who seek God with goodwill.

All this holds true not for only the Christian but also for all men of goodwill in whose hearts grace is active invisibly. For since Christ died for all, and since all men are in fact called to one and the same destiny, which is Divine, we must hold that the Holy Spirit offers to all the possibility of being made partners, in a way known to God, in the paschal mystery.

Father Spitzer points out a significant flaw in the 1988 carbon testing that dated the origin of the Shroud to the middle ages.
Start Reading
Maggie Ciskanik, M.S.

Habitable Worlds and the Origin of Water

Mircea Eliade found that religion originates from an experience of the sacred common to all. Also common are hierophany, myths, and homo religiosus.
Start Reading