“Albert is exactly the saint whose example should inspire this modern age, so ardently seeking for peace and so full of hope for its scientific discoveries.” —Pius XI, 1931

St. Albert the Great (A.D. 1200-1280) is most often remembered as the teacher–mentor and friend to St. Thomas Aquinas. Less commonly known is that the moniker “the Great” was given to him during his lifetime. Albert Magnus was canonized and named a Doctor of the Church in 1931. He was given the title, Doctor Universalis, testifying to the breadth and depth of his wisdom and learning. In 1941, he was named the patron saint of the Sciences.

Albert was born in Germany sometime around 1200 to a family belonging to the lower nobility. It is likely he had brothers and sisters, but only one is known—Henry, who became a Dominican. Not much is known about his childhood, but apparently, he loved to hunt and fish, spending time exploring the countryside. It is very likely that he received the typical education offered at the local level, but pursued higher studies at the famous medieval University of Padua, Italy. He studied the liberal arts, which included grammar, logic, rhetoric, mathematics, geometry, astronomy, and music. It was here that he encountered the Dominicans.

His intense relationship with God, the Dominican Friars' example of holiness, hearing the sermons of Blessed Jordan of Saxony, St Dominic's successor at the Master General of the Order of Preachers, were the decisive factors that helped him to overcome every doubt and even to surmount his family's resistance. —Pope Benedict XVI

After his ordination, Albert taught at several universities, eventually completing his theological studies at the University of Paris. His intellectual abilities were widely recognized leading to a variety of assignments as bishop, reformer, preacher, and papal representative.

In 1248, the Dominicans sent him to establish a theological “studium” in Cologne. It was here that a student he had first met at the University of Paris became his friend. This was none other than the “Dumb Ox,” St. Thomas Aquinas. Their relationship developed into a deep and lasting friendship. (Years later, after Thomas’ early death, Albert defended the Angelic Doctor’s teachings against multiple objections and even condemnation in certain circles.)

In 1254, Albert was elected Provincial of the Dominican German province, which also covered Austria, Switzerland, Holland, Latvia, and parts of Poland. On foot, he tirelessly visited and reformed the forty Dominican communities scattered throughout the region. In 1260, St. Albert was appointed Bishop of Cologne but resigned in 1262.

His diplomatic abilities were then tapped by Pope Urban IV, who appointed him Papal Nuncio to Northern Europe. In a series of appointments and missions through the ensuing years, he became known as an effective preacher and reformer, bringing reconciliation where distrust and division reigned. This was particularly evident at the 1274 Council of Lyons which attempted to reconcile the Latin and Greek churches separated by the Schism of 1054. Teaching occupied much of his later life even though he was often called upon to intervene in strained political situations.

Called Albertus Magnus in His Lifetime

His many writings—in over 38 volumes—cover a wide variety of topics. As Benedict XVI explained in his General Audience, March 24, 2010:

"Indeed, with a glance at the titles of his very numerous works, we realize that there was something miraculous about his culture and that his encyclopedic interests led him not only to concern himself with philosophy and theology, like other contemporaries of his, but also with every other discipline then known, from physics to chemistry, from astronomy to mineralogy, from botany to zoology." [emphasis added]

In one summary of his life, it is claimed that “St. Albert’s specialty was no less than ‘everything created.’" The following is a snapshot of his encyclopedic knowledge.

"He was the first man in 1500 years to study the physiology of plants.
He described bees, ants, spiders, eels, salmon–and their habits.
He knew as much as or more that the doctors and dentists of his day about medicine, surgery and dentistry. He had a great fund of knowledge about herbal remedies. . . an expert on horses and their diseases.
St. Albert knew that gunpowder could be made from sulphur, saltpeter and charcoal. He conducted chemical experiments and held the possibility. . . that synthetic metals..could be made." —Fr Christopher Rengers

Copies of St. Albert’s writings, owned and annotated by Christopher Columbus, are preserved in Seville, Spain. This is most interesting since St. Albert taught that the world was a sphere, as did Aristotle! 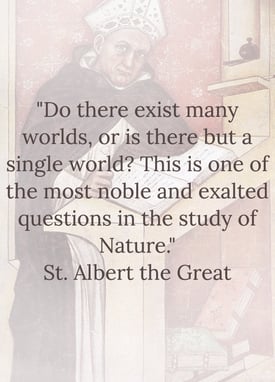 Many modern scientists and even historians presume that the study of science at the time of St. Albert was dominated by superstition and clouded by belief in a Creator.

This is a mistaken perception.

St. Albert engaged the natural sciences in a pattern familiar to the modern mind, using empirical verification to investigate the natural order and employing mathematical and known principles of physics in astronomy. As noted in Stanford’s Encyclopedia of Philosophy:

"Albert inherited astronomy as part of the scholastic curriculum known as the quadrivium. But his interest in this science was not merely conceptual; he was also interested in using mathematical calculations and conferring with astronomical tables to study the nature of celestial bodies. He was concerned with the constellations, the sizes of planets and stars and their positions and movements in the heavens. He seems to have known about astronomical instruments, particularly the astrolabe, but gives no clue as to what method of investigation he used to carry out his studies. He did make it clear, however, that the principles of physics had to be applied to celestial bodies, which he regarded as natural physical bodies moving in real space."

In one of his scientific works, Albert demonstrates a basic understanding of the formation of fossils, which was hotly contested even during the time of Blessed Nikolas Steno, father of geology, some 400 years later.

Evidence of this [transformation of animals into fossils] is that parts of aquatic animals and perhaps of naval gear are found in rock in hollows on mountains, which water no doubt deposited there enveloped in sticky mud, and which were prevented by coldness and dryness of the stone from petrifying completely. —St. Albert the Great

St. Albert the Great’s Contribution to Theology and Philosophy 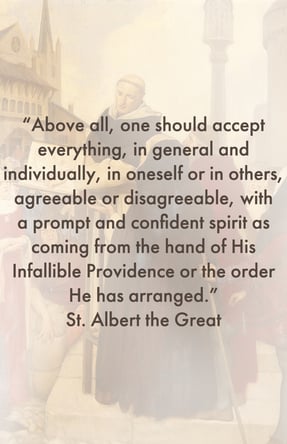 During Albert's time, many Christian scholars were hesitant to use or even study Aristotle’s philosophy because he was a pre-Christian thinker. The question that still haunts modern thinking was present at this time: Are faith and reason/science in conflict with each other?

"St Albert the Great opened the door to the complete acceptance in medieval philosophy and theology of Aristotle's philosophy, which was subsequently given a definitive form by St Thomas. This reception of a pagan pre-Christian philosophy, let us say, was an authentic cultural revolution in that epoch."

Benedict also notes that by intensely studying Aristotle, certain “that all that is truly rational is compatible with the faith revealed in the Sacred Scriptures,” Albert enabled the formation of a philosophy that was distinct from theology, and saw that both were contained within “the unity of the truth.”

"So it was that in the 13th century a clear distinction came into being between these two branches of knowledge, philosophy and theology, which, in conversing with each other, cooperate harmoniously in the discovery of the authentic vocation of man, thirsting for truth and happiness." —Pope Benedict XVI

Whether writing about the natural sciences or offering spiritual advice or theological considerations, St. Albert displays a common sense approach to learning the truth about nature and reveals the depth of his understanding of the fundamental aspects of the human person. These quotes capture some of his wisdom.

St. Albert was deeply devoted to the Eucharist and the Mass, writing over 400 quarto pages and preaching 32 sermons on the Eucharist. Another significant aspect of St. Albert’s spirituality was his devotion to the Blessed Mother. From one of his early biographers, Rudolph of Nijmegen (1488), we learn that he composed hymns and poetry in her honor.

He composed many sequences in honor of the glorious Virgin which are as remarkable for their depth of meaning as for their harmony and interior spirit. In the convent garden and elsewhere he delighted to sing them with intense sweetness, devotion, and enthusiasm. (quoted in The 33 Doctors of the Church)

Benedict XVI points out that St. Albert’s “formula for holiness” consisted of personal prayer fueled by the study of Scripture, frequent reception of the Sacraments, and “to desire all that I desire for the glory of God.” The Closing Prayer from St. Albert the Great’s feast day perhaps best summarizes the gift that his life is for the Church and for us.

God our Father,
You endowed St. Albert the Great with the talent of combining human wisdom with divine faith. Keep us true to his teachings that the advance of human knowledge may deepen our knowledge and love of You. Amen.

In his new book, The Moral Wisdom of the Catholic Church, Fr. Spitzer proves the importance of following the Church's teachings.
Start Reading
Lauren Woodrell

St. Faustina, the Apostle of Divine Mercy, led a life to save sinners from hell. Her words and actions still guide us today.
Start Reading