Are Near Death Experiences Contrary to Church Teachings?

A near death experience (NDE) occurs when a clinically dead person undergoes an out of body journey.

This neutral position allows us to question whether we should take near death experiences into consideration.

Citing evidence for a near death experience should be done with caution.

Some people may have a near death experience, but if it is not from a longitudinal peer-reviewed study like that of Dr. Kenneth Ring at the University of Connecticut, then there is no way to verify its validity.

As we move forward, we will take our information from scientific research as opposed to individual accounts.

There are three aspects of near death experience related to teachings of the church that can be explored:

1. Evidence of the transphyical e.g. the soul, afterlife, ect.
2. Resemble the teachings on the Resurrection
3. God’s unconditional love

Evidence of the Transcendent

Upon leaving the physical body, a near death experience patient journeys to a transphysical state where they frequently meet deceased relatives.

One peer-reviewed study reports an encounter of a child (that we shall call John) who undergoes a near death experience.

John wakes up from his coma to tell his parents, “I’ve just seen Aunt Nelly in San Francisco and she said to tell you that she’s alright.”

The parents are astonished to hear this seeing as they had not seen Aunt Nelly in years and John has never met her, but lo and behold they find out that Aunt Nelly had died of a heart attack in the streets of San Francisco at the exact same time and day that John was undergoing clinical death in St. Louis, MO.

This encounter (one of many cited in the study) demonstrates the common ability of NDE patients to converse with the deceased.

Other patients describe events that occurred in the hospital room or exact conversations between loved ones in the waiting room as they lie clinically dead.

When properly vetted, these reports can be used as evidence to show that there really is more than just physical reality.

Near Death Experiences and the Resurrected Body

In 1 Corinthians 15, St. Paul tells us that we will have glorified, spiritual bodies in heaven.

A majority of people who undergo near death experiences described that they had a new transphysical form that was not subject to the laws of nature.

Patients would hover above their physical bodies, pass through walls of waiting rooms and hospitals, ascend multiple floors of hospitals, and frequently go to “the other side.”

Although this transphysical form differs from Jesus’ resurrected body in terms of power and glory, recall that in scripture Jesus appeared as a spirit and walked through walls.

Moreover, St. Paul tells us that in our glorified bodies we will still be “embodied” e.g. able to use our five senses.

This embodiment corresponds with reports of near death experiences.

As those undergoing one frequently visit with deceased relatives and are able to recognize their physical features. 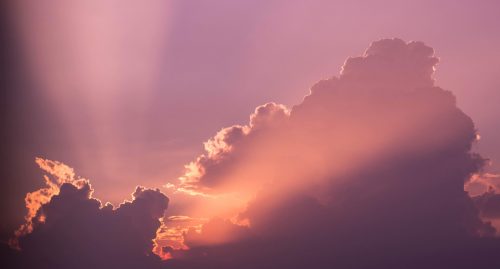 Another similarity between revelation and near death experiences is the overwhelming presence of love that those feel while undergoing a transphysical journey.

When patients cross over to “the other side” they often encounter an overwhelmingly loving white light.

A significant percentage of near death experience patients describe this light as loving, affirming, affectionate and finally as a compassionate.

The transphysical form feels absorbed by this loving light, while still keeping their own identity.

The following case resembles hundreds of others reported in longitudinal peer-reviewed studies:

I became very weak, and I fell down. I began to feel a sort of drifting, a movement of my real being in and out of my body, and to hear beautiful music. I floated on down the hall and out the door onto the screened-in porch. There, it almost seemed that clouds, a pink mist really, began to gather around me, and then I floated right straight on through the screen, just as though it weren’t there, and up into this pure crystal clear light, an illuminating white light.

It was beautiful and so bright, so radiant, but it didn’t hurt my eyes. It’s not any kind of light you can describe on earth. I didn’t actually see a person in this light, and yet it has a special identity, it definitely does. It is a light of perfect understanding and perfect love….And all during this time, I felt as though I was surrounded by an overwhelming love and compassion.

The love and benevolence of the white light seems to indicate the intention of a loving God to fulfill our greatest desire, namely, unconditional love and joy with God throughout eternity, which resembles Jesus’ revelation of God the Father.

In sum, by comparing near death experiences with revelation one sees many similarities.

As Catholics, it is possible to point to scientific data on near death experiences as further evidence for a transcendent soul, the glorified body described by St. Paul, and for God’s unconditional love.

Click here to view more in depth information on near death experiences.

When it comes to near-death experience stories, there are many unscientific writings based on the writers’ own agendas rather ...
Start Reading
Magis Center July 27, 2010 1 min read

Pim van Lommel on Near Death Experiences and Consciousness Beyond Life

Negative Near Death Experiences and Hell

Near death experiences (NDEs) have garnered a reputation of being blissful, other-worldly adventures complete with encounters ...
Start Reading