Every October 31st, the celebration of All Hallows Eve, now more commonly known as Halloween, takes over the streets. Households hand out candy to children who say “trick or treat” and hope they don’t get raisins or apples in their bags of goodies. Groups of friends find trails, houses, and theme parks that advertise “spooky” or “haunted.” Jack-o-lanterns sit on porches as little works of art. Families use cobwebs as decorations instead of using brooms to clear them. Blood, skeletons, and screams are in abundance.

But before the All Hallows Eve we know today came to be, the night of October 31st was the Celtic celebration of Samhain. From its ancient origins to its religious takeover, the holiday has taken on a life of its own.

The History of All Hallows Eve

The Celtic festival known as Samhain (pronounced sow-in) was a celebration of the end of harvest and preparation for the coming winter—a time usually associated with death. It was celebrated on the eve of the Celtic New Year (November 1st). It was on this night that they believed that the boundary—between the deceased and living—would become blurred and the dead would walk among the living for that single night. 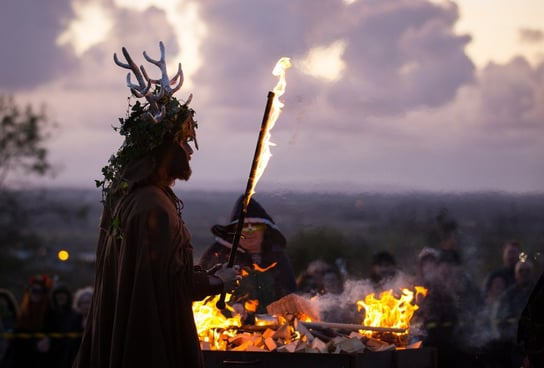 When the Romans took over the majority of the Celtic lands around A.D. 50, they also had similar celebrations. The Romans celebrated, in late October, a holiday called Feralia. Feralia was known to honor the dead. The following day was known to celebrate Pomona, the Roman goddess of fruit and trees.

On May 13th, A.D. 609, Pope Boniface IV established the date as “All Martyr’s Day” and dedicated the Pantheon to honor all the Christian martyrs. Later, in A.D. 837, Pope Gregory III, moved the observance of All Martyr’s Day to November 1st and expanded the celebration to also include all saints.

As the reach of Christianity spread throughout the Celtic territories throughout the 9th century, All Saint’s Day blended into the traditions of the Celtics. Later, in A.D. 1000, November 2nd was made All Soul’s Day to honor the dead. 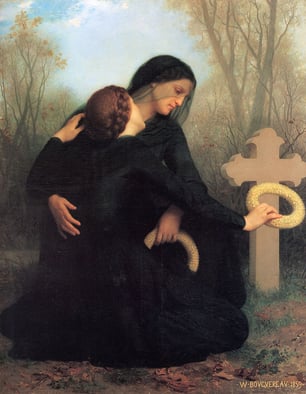 The Day of the Dead by William-Adolphe Bouguereau, Public domain, via Wikimedia Commons

In Middle English, Alholowmesse meant “All Saint’s Day”—so the day began to also be called “All-Hallowmas.” Consequently, the night before it was deemed “All Hallows Eve” later to be called Halloween.

Traditions of All Hallows Eve: Trick-or-Treating and Costumes

Trick-or-treating is typically spoken of as an American tradition, but it likely has roots that go back to the parades that were held on All Souls’ Day in England. During those parades, the poor citizens would go around and beg for food, or “soul cake,” in exchange for a promise to pray for the families' dead relatives. The Church was known to encourage the distribution of soul cakes as it was a way to replace the pagan tradition of leaving food and wine for roaming souls. 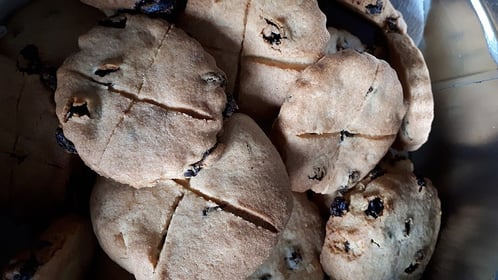 The tradition of dressing up for Halloween also has roots that date back to both European and Celtic roots. With the origins of the holiday as preparation for the grueling winter months, many lived in fear of food running low, the darkness, and overall uncertainty. It was believed that during the winter, ghosts would come back to be among the living. So, to avoid an encounter with a ghost who would confuse them for a spirit, people would wear masks. Later, this would morph into dressing up in full costume and would accompany trick-or-treating and Halloween parties.

The Religious Observations of All Hallows Eve

As mentioned above, All Hallows Eve is the evening before All Saint’s Day (November 1st) which is followed by All Soul’s Day (November 2nd). So in anticipation of the following celebration, October 31st is observed as a day that can fulfill the holy obligation of going to Mass the day before the Holy Day of Obligation (November 1st).

On All Hallows Eve, the traditional observation is a vigil where worshipers pray and fast in preparation for the feast day itself (All Saint’s Day). The Mass, known as the “Vigil of All Hallows” or the “Vigil of All Saints” was often followed by a visit to the graveyard where they could place gifts and candles for the celebration of the next day. In fact, those processional candles were usually placed inside gourds with holes to protect the flame from the flame—now commonly known as Jack-o-lanterns.

A Verse for All Hallows Eve

Praise ye the Lord. Sing unto the Lord a new song, and his praise in the congregation of saints.
Let Israel rejoice in him that made him: let the children of Zion be joyful in their King.
Let them praise his name in the dance: let them sing praises unto him with the timbrel and harp.
For the Lord taketh pleasure in his people: he will beautify the meek with salvation.
Let the saints be joyful in glory: let them sing aloud upon their beds.
Let the high praises of God be in their mouth, and a two-edged sword in their hand;
To execute vengeance upon the heathen, and punishments upon the people;
To bind their kings with chains, and their nobles with fetters of iron;
To execute upon them the judgment written: this honor have all his saints. Praise ye the Lord.
—Psalm 149

A Catechesis for 'God Butchers': The Metaphysics of Time and Eternity: Author Matthew Tsakanikas discusses fighting the new atheism—'God Butchers'—in the wake of suffering, darkness, and pain.

5 Credible Stories of Near Death Experiences (Peer-Reviewed): A look into five stories of near-death experiences from peer-reviewed journals and what they can teach us about consciousness, the afterlife, and God.

The Stages of Christian Mysticism: A Summary (Spitzer Scholarly Article)

“Albert is exactly the saint whose example should inspire this modern age, so ardently seeking for peace and so full of hope ...
Start Reading
Lauren Woodrell November 18, 2022 8 min read

The struggle within is one of the most connective aspects of the human experience—it is something we cannot outrun. However, in ...
Start Reading