Across the world and throughout human history, artisans have created extraordinarily similar objects in response to their cultures’ religious impulses. In the first part of this series, I discussed holy “high places” common to nearly every major civilization. In the second part of this series, I discussed the global phenomenon of pilgrimage—how it marks space and functions as a sacred journey.

Now, in the third installment, my focus will be more intimate. I will “zoom in,” as it were, to look at the people inhabiting these spaces: the pilgrims traversing ancient roads, for example, or the priests climbing lofty temple steps.

Specifically, I will consider how people from all historical time periods, and on every inhabited continent, have decorated and clothed their bodies, signaling meaningful roles in terms of their dress. I will show, I hope, that the idea of transformation through dress is common to all world cultures and exhibits awareness of a theater of action—a realm of meaning—beyond that of our utilitarian, day-to-day lives. Through different types of dress (for example royal robes, priestly vestments, and ceremonial masks), human beings seek to transcend their moment in space-time and become part of a drama older than the stars.

Before we consider historical examples, it may help to engage in some self-reflection. I think all of us know what it’s like to “transform” after putting on specific clothes. Anyone who’s ever been part of a wedding party, for example, knows that the requisite gowns and tuxes make one feel part of a larger story. Among churchgoers, the donning of one’s “Sunday best” might spark a sense of decorum they don’t otherwise feel. And even outside of sacred contexts—think of teenagers getting ready for prom, or couples headed to a fancy restaurant—“dressing up” is marked by a thrill of transformation.

In each of these cases, the result is paradoxical. We feel like we’re transforming into something we’re not; but at the same time, we’re becoming something we know we truly are. No wonder Halloween parties and children’s dress-up play can have such a magical effect! Both tap into a latent awareness of a hidden dignity we all share—the dignity of souls endowed with a grand, eternal destiny.

In the remainder of this essay, I will show how this deep awareness of a higher individual purpose is manifest in three cultural phenomena: the dress of royalty, the dress of religious persons (e.g., priests and monks), and the costumes of ceremonial dancers in ritual celebrations. Each of these developments show our human need to transcend the day-to-day—to be lifted out of linear time into a theater of myth and spirit.

The Dress of Royalty

Some form of monarchy (whether patriarchal, or more rarely, matriarchal) was a feature common to almost all world cultures before the modern period. And royal families always had special and meaningful modes of dress. One scholar who helped give language to the global phenomenon of royal dress was the historian Ernst Kantorowicz. His 1957 book The King’s Two Bodies has helped generations of scholars understand how individual uniqueness can coexist with a mythical or sacred social role.

For Kantorowicz, medieval European kings (as his title suggested) had two bodies: one literal, one mystical. The literal body could age, grow ill and die; the mystical body, however, was indifferent to the individual’s fortunes and was passed on after the individual’s death. Though some scholars mocked Kantorowicz’s insights as “metaphysical nonsense,” this core idea—of two bodies, one fragile and mortal, the other dignified and transcendent—is implicit in the royalty traditions of many countries around the world. Indeed, the scholars who mocked Kantorowicz were shockingly ignorant of other, well-established precedents.

In fact, the notion of a king’s “two bodies” is visually attested worldwide in the obvious ways that royal garb has transformed its wearers. In ancient Egypt and the Near East, for example, wigs and false beards were de rigueur for monarchs, and they probably signified participation with the god Osiris (imagine the thin, gleaming chin-piece of King Tut’s death mask). Even Egypt’s most powerful woman pharaoh, Hatshepsut, wore a false beard in order to assume the “real shape” of the archetypal ruler.

In a similar way, Chinese emperors wore remarkably standardized garments over the course of many centuries, including flowing, enveloping robes and (during the Song Dynasty) headpieces that extended double the body’s width. Portraits of rulers in the Americas, such as the Aztec Emperor Montezuma, show voluminous cloaks, shining jewelry and towering headpieces. (Some vestige of this tradition remains in the splendid headdresses of present-day North American tribal leaders.) Meanwhile, in the Hawaiian Islands, monarchs wore brilliant, stiff mantles made of hundreds of thousands of feathers from jungle birds. 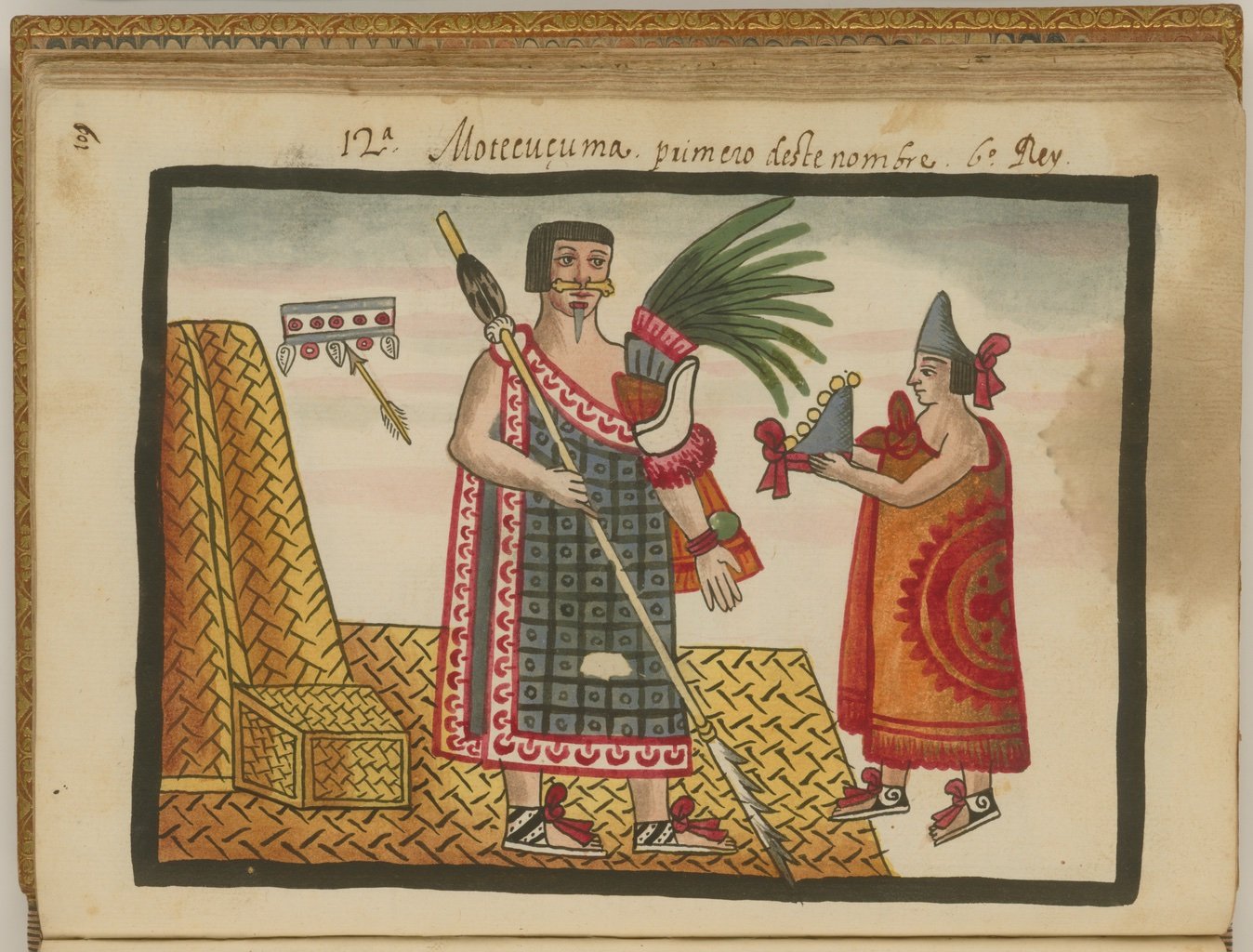 The world’s remaining twenty-first century monarchs still take part in this tradition, though usually with more subtlety. (Imagine the tall crown and festooned robe worn by Queen Elizabeth II at her coronation.) Among the Kuba people of the Congo, however, highly elaborate ceremonial dress reminiscent of more ancient traditions is still donned by the reigning king. When he is presiding, King Kot-a-Mbweeky III is sometimes plated with heavy, expensive and meticulously crafted garments that almost completely obscure the man underneath. In his official regalia, the Kuba king seems to become almost a different being—a living statue of great mystery and power. 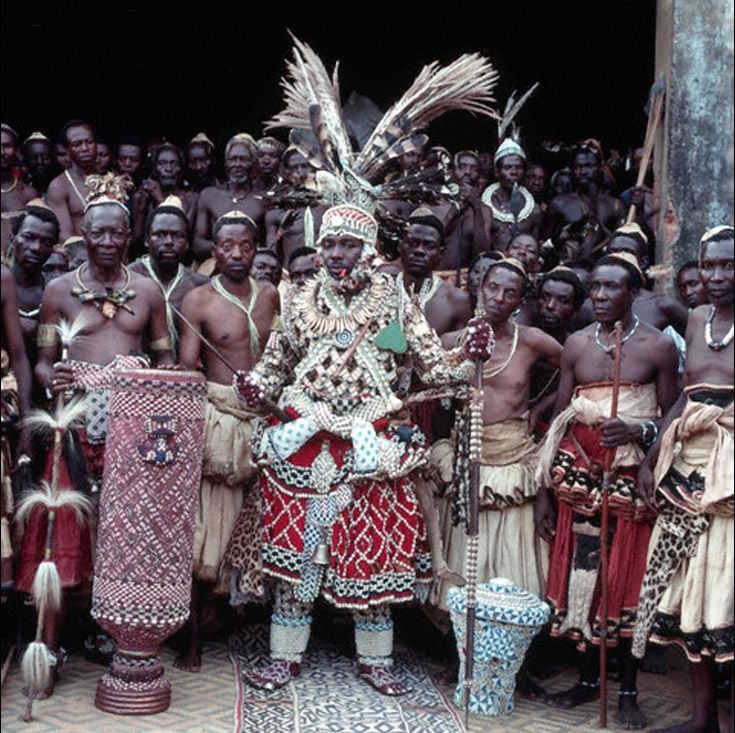 It has been fashionable, in modern academic discourse, to dismiss the global phenomenon of royal regalia as a form of conspicuous consumption, flaunting the wealth of reigning monarchs eager to propagandize on their own behalf. Other modern scholars see royal regalia as akin to modern fashion trends that denote “in-group” and “out-group” status through telling details. Surviving traditions like those of the Kuba, however, attest to the deeply spiritual origins of the regalia phenomenon. Among the Kuba, the most elaborate forms of costume literally transform their wearers into spirits. When the king dons a mask to cover his face—the last, exposed part of his mortal body—heaven has indeed come down to earth.

The Dress of Religious Figures

Throughout the millennia of recorded human history—at least until modern times—the distinction between religious and secular has been fuzzy at best. This is because most world cultures have understood spiritual power and social power to be connected.  Thus, political leaders (such as the Kuba King Kot-a-Mbweeky III, the Pharaohs of Egypt, the Brahmins of India, the emperors of Central America and tribal leaders throughout Oceania) have also been religious leaders. All of them have been granted political power by some sort of “divine right,” and all have had authority to preside over religious rituals. Only in modernity have we come to expect a separation of Church and State.

Nevertheless, sacred leaders have always been aided by other members of the “priestly classes,” and even today, religious leaders in democratic countries wear vestments signaling their participation in sacred stories that transcend time.

The Roman Catholic Pope, considered the “vicar of Christ,” signals his transpersonal role by sometimes wearing a tall headpiece (a triregnum or mitre), a long train, and a heavy robe. Other authorities within both the Roman Catholic and Eastern Orthodox churches wear similarly elaborate garments whose colors and symbols change with the liturgical season; these modulations in dress help retell the Christian story in unending, annual rhythm. 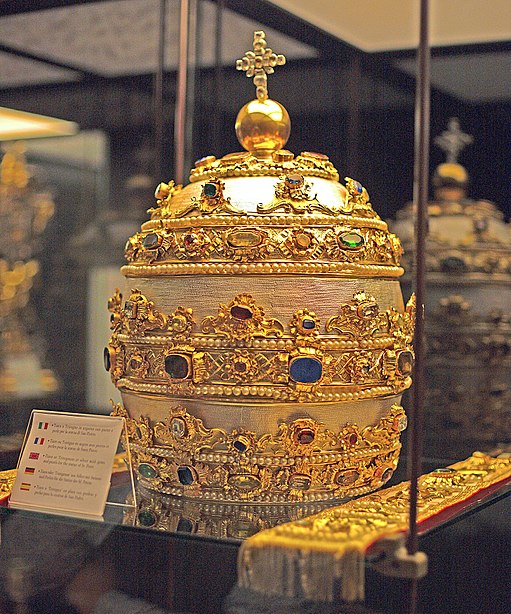 Papal Tiara in silver with gems and pearls in the Treasury of the Basilica of St. Peter at the Vatican / MatthiasKabel, CC BY-SA 3.0, via Wikimedia Commons

In Buddhism and Hinduism, religious leaders are recognized by both their brilliantly colored robes and (sometimes) cosmetics or hairstyles. In Japan, Shinto priests wear richly embroidered robes and distinctive, peaked hats. And in Oceania, both religious and political status can be communicated through stunningly intricate tattoos. In all of these cases, special garments and markings literally outfit their wearers to negotiate effectively with the divine.

Religious vestments do capably signal their wearers’ participation in a divine drama—a drama often full of longing, sacrifice, and sometimes perilous communication with the spirit world. However, humanity’s clearest expression of spiritual transformation through costume can be found in the ancient mask traditions of every inhabited continent. Even countries with millennia-old “major” religions, such as China and Spain, had ancient mask traditions, as archaeologists have shown.

We have already seen how the king of the Kuba people transforms fully into a spirit when wearing both his regalia and his royal mask. In other world traditions, a similar transformation occurs when masked performers, whether royal or “common,” engage in their cultures’ sacred pantomimes.

In these religious dances, founding stories are both retold and re-enacted. Among the Kuba, dancers often channel three primordial ancestors, the males Mwashamboy and Bwoom and the female Ngady Amwaash. The males vie to copulate with the female, from whose womb all humans are thought to derive. Among the Elema people of Papua New Guinea, the dawn of human civilization used to be re-enacted every twenty years with water-spirit masks personifying the ocean. In Tibetan Buddhism, dancers wear skull-shaped masks to embody worldly spirits of impermanence and decay, reminding one of the constant cycle of death and rebirth.

Tribal initiation rituals, during which young adults re-enact the primordial struggle to forge order from chaos, are also common across the world, from remote Patagonian steppes to the African savannah. An important and fascinating ceremony among the indigenous people of the Northwestern U.S. is the Hamatsa initiation ritual. Here, young men are first stranded in the forest, where they become possessed by a cannibal spirit of destruction (Baxbaxwalanuksiwe). They are then lured into the village where, over the course of the Hamatsa ceremony, they are tamed and reintegrated into the cosmic order symbolized by the tribal hierarchy. 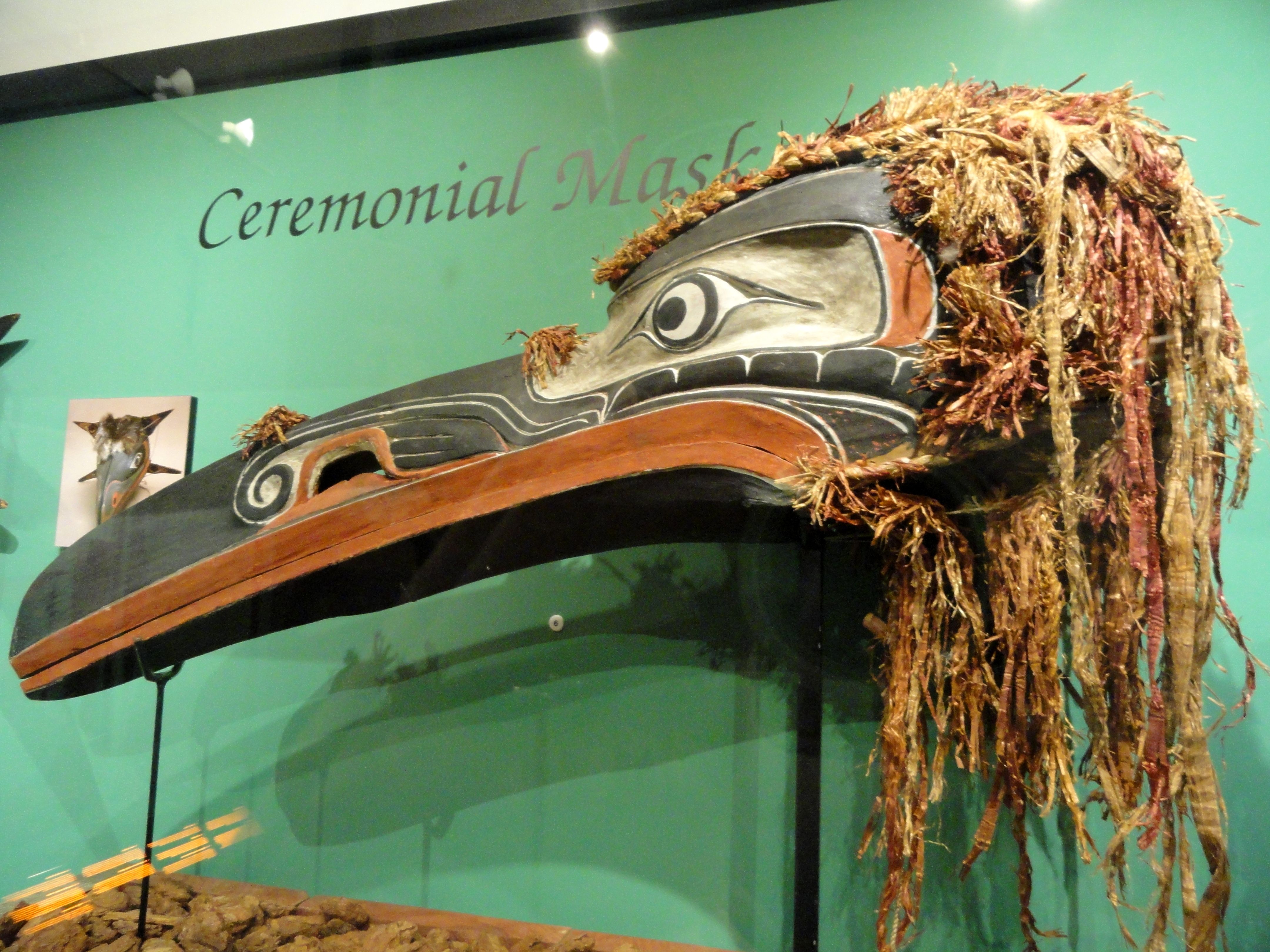 In these cases and others, masked performers, and by extension their audience, are transported through dance into a realm of eternal, pulsing energies—a realm of elemental struggles continually reborn. The aboriginal populations of Australia call this realm “dreamtime,” and among the Kuba it is the period of Creation, re-asserted at every human birth and death. It is a spiritual substratum or core, throbbing beneath the crust of our day-to-day reality, constantly pushing through and giving meaning to our lives.

The idea that individual, time-bound humans can enter into timeless roles is related to Mircea Eliade’s idea of the “eternal return.” For Eliade, the world’s religions are largely coordinated efforts to connect with the origins of things—the primal forces that express themselves in birth and death, the changing of the seasons, and the battle of good and evil. Such dramas are embracing and eternal—they subtly (and sometimes obviously) inform everything we do. Costume, liturgy, and mythic stories, therefore, make explicit the true foundation of reality. They open our eyes to the real meaning of human—and superhuman—history. Paradoxically, they can cover in order to reveal.

Modern industrialization and secularization have threatened the existence of the global practice of re-enactment through costume. However, I believe the impulse to transform through dress is a basic human characteristic that will not go away.

Today, we delight when pop stars transform into pharaonic god-kings (Kanye West) or seductive Buddhist deities (Lizzo). We enjoy makeover shows (“What Not to Wear,” “Extreme Makeover”) that link external transformation to internal discovery. And our contemporary notion of gender increasingly seems anchored more to appearance and dress than to biology.

In this twenty-first century, we are reawakening to the spiritual power of transformative costume. We are re-learning—haltingly and awkwardly—that a hidden, supernatural destiny lies inside each of us, waiting to unfurl.

In the first installment of this series, I wrote about sacred “high places”—temples and shrines that lifted priests and ...
Start Reading
Katie Kresser, Ph.D April 28, 2021 7 min read

More than any culture in the history of the world, ours is obsessed with portraits. The individual face, its soulful eyes ...
Start Reading